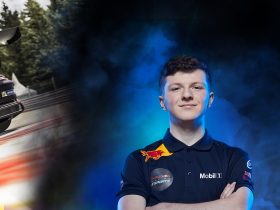 It is the dream of every esports racer: To feel your car’s engine humming while sitting in the cockpit. To smell that mix of rubber and gasoline that can be found all around a racetrack. To let the acceleration push you deeper and deeper into your seat. To finally make the step from virtual into real-world racing. Only a handful of drivers were able to fulfill that dream. In 2020, Igor Fraga joined Formula 3 and James Baldwin raced for Jenson Button’s team in the British GT Championship.

“Motorsport Esports is the only type of gaming where your skills in the virtual world can transfer across to the real thing,“ said Darren Cox, the creator of popular racing competition show World’s Fastest Gamer. How true is his statement? OverTake spoke to the first World’s Fastest Gamer winner, Rudy van Buren, to find out how racing games can be used to become quicker in real life.

Simulations are not a must-have

“I practiced in racing games before every race this year,” says Rudy van Buren. The Dutchman competed in the 2020 Porsche Carrera Cup Germany and had his breakthrough by winning the inaugural season of World’s Fastest Gamer in 2017. Since then, the esports racer has been working as a simulator test and development driver for Formula 1 and Formula E teams. The 28-year-old regularly appears in real racing competitions like the Porsche Supercup or Race of Champions. His expertise on the connection of virtual and real racing is unmatched.

The variety of racing games to use for home exercise is large. There are simulations which aim for an exact replication of reality. In this genre, rFactor2 is Rudy’s go-to platform to use for practice, he tells. “The force feedback and car physics are closest to what it should be.”

Meanwhile, mainstream games like F1 2020 also include faithful replicas of real-world circuits. However, their car physics are not as realistic as they are in simulations. But that fact does not make them useless for race preparation, says Rudy van Buren. “The choice of game always depends on your goal in preparation. If your goal is getting the flow of a track, you can do it in any game.”

Adapt your equipment to your goals

However, when aiming to get a proper feeling for the car you are about to race, you have to use a proper simulation, Rudy explains. “If you race in a GT3 series, it is useless to use F1 2020. You’re just practicing the wrong thing then. You always have to look at what class you are preparing for. See which games are on the market that suit your needs and pick them up.”

WHAT HARDWARE DO I NEED TO BE COMPETITIVE?

No matter which of those games you use and how detailed your practice is set to be, there is a minimum hardware required, the World’s Fastest Gamer tells. “You need minimum pedals and a steering wheel. For the basic things, it doesn’t matter if you use Logitech, Fanatec or Simucube. But if you are in a racing series you need better equipment, which is able to replicate things like braking force or feeling of the steering wheel. That’s only possible on more expensive equipment.”

Forming a training program to prepare for a race

The choice of suitable game and hardware is just the start. To maximize the benefit of your virtual practice, it requires a good training program. Rudy always starts practicing tracks with multiple basic laps. “The goal is to get your brain into racing mode for the weekend. Learn the racing line, see what the difficult points are, where to overtake.”

Depending on your platform of choice, there is always room to simulate more realistic circumstances. Games like iRacing, rFactor2 or RaceRoom hand the players the tools to tweak their cars to the smallest details, be it tire pressure, weight distribution or brake bias. “When using a professional platform, you can optimize the car setup towards how the real car feels. You can then work only on the driving style, that is one approach. Whereas in Formula E or Formula 1, the teams use the simulations to optimize and try out different car setups. The mainline of how to use the simulation is to know what your goal is. Then you can clearly use it beneficial for the real-life thing.”

Even though racing games promise to deliver a realistic experience, they still run behind professional simulators being used by racing teams. Rudy has been testing and developing these simulators for years and tells there are crucial factors racing games do not get right at the moment. “One of the biggest flaws in home sims is the tire model and the driving style that comes with it. In every game, there are unrealistic tricks to get around the track quicker.” Therefore, all big racing teams use more advanced software like Cruden or rFactor Pro, the Dutchman explains. Formula 1 teams even developed their own simulation programs.

Using those, the engineers are able to tweak even the smallest details influencing the behavior of their car. To do so, they use data they have been gathering from their real vehicles, making the simulation as realistic as it can get. “In these programs, the only driving style that works is the real one. There is no tricks,” the simulator test driver reports.

The fact professional simulators are superior compared to home games is no surprise. But it does not mean at all that esports racers are not able to use their homemade skills in the real world. Rudy also worked as a coach in season two of World’s Fastest Gamer. He has seen and helped several sim racers to use their talent on real tarmac.

“Gamers tend to be at a certain level relatively quick. They will get around better than the average because they know about racing lines, how to turn in and all that stuff,” the Dutchman says. “People that are sceptic about gaming will be impressed about their basic set of skills. But taking the next step is where the hard work begins.”

The next step: Overcoming the comfort of racing games

The biggest factor in which real racing differs from esports racing is neither the handling of the cars, nor the style of driving. It’s the circumstances surrounding practice and race weekends making the dive into real-world competitions hard for sim racers. “In some sim racing series they put in 40 hours of exercise a week for one track. They get good by repetition and not by just going on feel,” says Rudy.

However, in real-world racing, there is no possibility to do that many hours of practice. Budget caps for equipment, circuit rent and personnel mean there are limited training days and hours. “You are limited to 50 or 60 laps a day on testing whereas on the sim, you just need two hours to do that many laps. In racing games, you can take bigger steps in a short amount of time.”

Besides the limited amount of practice time, the real world always holds surprises the drivers cannot influence. “It happens that you pay 10,000€ for a training day and only get rain laps so you learn nothing,” our expert recounts. For Rudy, this circumstance marks the biggest challenge sim racers have to take on when entering a real cockpit: “It’s about adapting. To be comfortable with all the unknowns. In sim racing, you are fast by practicing until perfection. But this is not possible in real life. You got to take the situation as it is and then optimize it.”

Throughout the last years, we have seen more and more teams becoming aware of esports racers and their skills. A third season of World’s Fastest Gamer is going to bring more talents from the virtual world into real cockpits soon. Esports racers have just started taking over traditional motorsports. The remaining question is: How far can their skills take them?

Do you think racing games are a good means to practice for real life races? Tweet us your opinion at @overtake_gg!