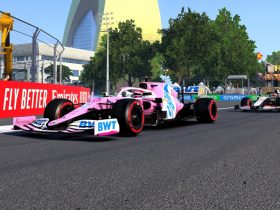 We spoke with two of the leading drivers in the F1 Esports series ahead of its next round this week.

The second round of the 2020 F1 Esports Pro Series kicks off this Wednesday with races at Zandvoort, Montreal and the Red Bull Ring. Jarno Opmeer and his Alfa Romeo Sauber F1 Racing team are currently leading the race to secure the biggest share of the $750,000 prize pool after the Dutchman won two of the first three races.

Opmeer’s team-mate Daniel Bereznay sits third in the drivers’ championship just behind Aston Martin Red Bull Racing’ Marcel Kiefer. The field was separated by very little during the opening three races, but Bereznay, who has finished in second and third in the previous two seasons, believes there will be a greater field spread in the second event:

We had a lot less time to prepare compared to what we had before the first event as [for that], we basically had two and a half months from when the game released. We knew the tracks pretty early so we practiced for three circuits for nearly forever, and now we have one-third of the time so I think the field will not be as tight as it was. I’m pretty confident that we’re the ones to beat ahead of the second event as well.

trash first day for me hopefully better next time https://t.co/A7JVAsEVN4

Despite the confidence, Bereznay was quick to point out the stiff competition and chief among them will be the defending teams’ champions Red Bull. Its new recruit Kiefer has proved to be a match for its star driver Frederik Rasmussen and Kiefer surprised many drivers by out-pointing Rasmussen across the first event. Kiefer himself said about the start of the season:

It was my best start to an F1 Esports season so far. The whole surrounding I’m in right now at Red Bull is really good for me to perform better and get closer to my potential so we can get the title back where it belongs. I didn’t expect anything, you always aim for the top but the grid is so close. I didn’t expect to beat Freddie, because in my opinion, if you look at it from a neutral point of view, Freddie is definitely the fastest driver on the whole grid. On one lap, nobody can beat him, so I’m obviously really happy with the performance. Both together, we can create something special.

It’s fair to say that full qualifying is not Daniel Bereznay’s preferred way to spend an hour. The series has followed real-world F1 in adopting a three-session knockout qualifying format for its fourth season. Bereznay was knocked out in Q1 in Vietnam during event one, but has changed his preparation for the latest event in response to this:

The new qualifying format is not something I really like, I think I already showed that in Vietnam. In Q1 the track is very different. The grip is a lot less than the grip you have in Q3. For practice sessions, we usually just practice the end of qualifying, as we expect to be through [to Q3], and that’s the important part and to adapt to Q1 is not something that’s very easy. After learning from the first event, we started to practice the very beginning of the qualifying session. But the thing that I don’t like is that we have a longer qualifying session than the race itself. The races are around 30 minutes and the qualifying session is nearly an hour long. There’s a lot of sitting around, your pulse goes to nearly zero and then you need to perform.

Kiefer is much more of a fan of format – saying it’s “pretty cool and it adds a different layer of pressure on us.” He also labelled Opmeer and Bereznay’s Alfa team as a ‘big surprise’ and praised their ‘huge step from last year.”

It’s #F1Esports race week 🎮 And the Bulls will be getting to grips with Zandvoort for the first time 💪🇳🇱pic.twitter.com/LwncE6gYTG

Alfa leads the reigning champions Red Bull by 29 points in the teams’ championship, with Renault and Ferrari completing the top four. Alphatauri is fifth ahead of 2018 champions Mercedes. Kiefer also told us about his general impression of the season start so far:

We already knew that Alfa would be good this year, but they still have to pull it off. I expected Mercedes to be stronger, that was a surprise, maybe they’ll bounce back. Also, our partners in crime, Alphatauri, they were pretty solid. Joni [Törmälä] did a great job. Renault is really strong this year. Ferrari, people probably expected them to be a bit stronger, but they also had technical difficulties, so we don’t know yet if their pace is actually lacking a tiny bit because David [Tonizza] still won a race when it did work.

Watch Event 2 of the F1 Esports Pro Series presented by Aramco on November 4-5, live on F1’s official Facebook, YouTube and Twitch channels. For full info on how to watch visit the F1 Esports website.

How excited are you about the upcoming round of the F1 Esports Pro Series? Tell us on Twitter at @OverTake_gg!