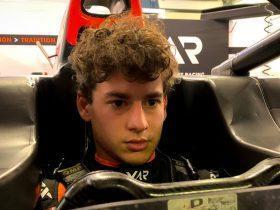 Four incredible racers fight their way through the playoffs of the eNASCAR Coca-Cola iRacing Series 2021. We got the answers to some glaring questions from them.

It is that time of the year again. The eNASCAR Coca-Cola iRacing Series 2021 is looking to sort through their best remaining drivers and find this year’s champion. We have asked four of the playoff competitors about the upcoming playoffs and what to expect from them.

An outlook on greatness

One of the household names when it comes to eNASCAR is the Canadian-born consistency machine, Keegan Leahy. He paved his way to the playoffs by putting in stable results and a win at Homestead in the season’s second race. In fact, this situation is very similar to last year when we last talked to him.

Not a lot has changed for me since then. The people I work with and for are the same. The only thing different is my spotter Mitchell deJong obviously secured a place in the series as well. To the surprise of no one, may I add.

When looking back at how the season went, Keegan spoke with clarity.

I had a pretty good season again. But I really try to look at the bad races and try to improve at them as well. The second race of the season is what made my season. I qualified on pole and never let it go. So I got my win in this year early, which we now need to get into the playoffs.

There has been a new format added to the eNASCAR playoffs. The top ten drivers now make it in, but a new rule allows drivers a guaranteed spot in the playoffs if they win a race and place in the top 20. This only applies, however if someone who ranks in the top 10 does not have a win. This means a driver can always place second and get first place in the regular season, but if the other drivers from the top ten have wins in the regular season, they are out.

Keegan has already set his sights on the playoff season’s first race and shared his opinion on Darlington Raceway with us.

Darlington is excellent. First race of the Playoffs. I have won there last year and dominated the year before that. So I think we can be really confident going into this one. But this race is so difficult because one little mistake can leave you in the wall. But it is a strong track for me, so I am eying this as my first win, so I don’t have to worry about the other two races.

We also wrote about this young gentleman last year. Back then, he was seemingly on his way to completing a miraculous recovery. Come the season’s end, he fell just shy of getting to the final race by a few points. His name is Jimmy Mullis.

This year Jimmy Mullis is looking pull off a similar feat. After starting the season with a few mediocre finishes, it was once again the sheer will of Mullis that put him through to the playoffs once again.

There were a lot of downs, to be honest. I struggled to get solid finishes, even though we had the speed. At the start of the year, we had a couple of times where we had a great pace but didn’t go forthe right strategy. I’ve been coming from behind all year and didn’t really give any thought to being in the playoffs.

But then we got to the month of July, which always seems to save me for some reason, and we found our way to a win. We are riding major momentum into the playoffs, and I feel we will have a good shot at this.

It is undeniable that Jimmy seems to find results when it matters most. His best work is done over an extended period of time, and we wondered what could be behind that mindset.

For me personally, it is something I have done for a very long time and been passionate about. I’ve always strived to put in 110% of my effort into anything I do so as rough as the season got, I never wanted to give up. As you saw, anything can happen. I’m just very fortunate to have a great group of guys behind me that keep putting in the work throughout the year. Our preparation never changed, and that is a big reason why we are where we are now.

In terms of the playoffs, Jimmy shared his thoughts on the upcoming races.

Darlington (first playoff-race*) is a big question mark for me, and I believe for everybody. Just because it is the low downforce package we are running, which we have not raced on big tracks yet. But our team has proven to work well with the low-downforce setup, so I am confident that we will have a car that is going to be in the conversation at least.

Bristol (second playoff-race*) is a track I have struggled with in the past, but I am confident that if I get the most out of the practice sessions and put in the time, I can do my thing. Talladega (third playoff-race*) is a wildcard for sure. Anything is possible there.

is a name most people from the sim racing scene will have heard at least once. He has been around forever, and more importantly, he is successful, as can be seen in our epic factor piece with him.

But before this season, most people probably wouldn’t have connected his name to the eNASCAR scene. That has changed in 2021, with Mitchell deciding to give this series a go. He qualified in his first attempt and managed to get into the playoffs as the only driver with multiple wins. deJong is in a promising position, yet he can still find areas to improve on when he looks back at his season.

We had quite some lows. Vegas comes to mind instantly, where we blew up the engine only a few laps into the race. Haven’t had many races as bad as this one. But we still had really high-highs with the road courses being good examples of that.

It is known, however, that Mitchell was not exactly a complete stranger to Oval racing before eNASCAR. As we mentioned earlier, he was part of the Keegan Leahy’s crew, in which he used to work as a spotter. This position basically relays information to drivers while they race because NASCAR racing can be extremely close and it is nigh on impossible to keep track of everything while thundering around an oval.

So we wanted to know if that helped Mitchell in any way.

I think the first year, where I spotted for Keegan, I pretty much did no Oval racing at all. I think the fact that I got to watch and pick up on things really prepared me for this. It felt natural to do it. When I did Road-to-Pro (Development program and small series to decide who gets to qualify for a coming season of the eNASCAR Coca-Cola iRacing Series*) I was still spotting, so I could see things and actually implement them, which was cool. Keegan obviously was a big part as well, after doing such a fantastic job.

Looking ahead to his first playoff run in his rookie season, Mitchell has very clear ideas as to how things have to go.

For the first two races, Darlington and Bristol, it will be crucial to do well in these. You can make a little more of a difference as a driver in terms of getting things done with raw speed and racecraft, opposed to Talladega and the final at Texas, where that might be a little harder. It will be very difficult, and I suspect it might be a bit random with how things are now. I really wish we had a road course in the final four.

After talking about Jimmy Mullis’ recovery, we have to mention the big story of the last round. punched his ticket to the playoffs by pulling out a last lap screamer.

What a finish in the @LogitechG Challenge 100 from Michigan! 🏁@mbussa75 finds victory lane after major drama on the final lap! pic.twitter.com/qZ58vWNqK0

Before this, it looked like Matt would finish in the upper midfield with no chance to get to the top ten purely on points. But the beauty of esports racing is that anything is possible. That is exactly what Bussa proved. Giving a quick recap of his season, the Mode Motorsports driver said this:

We had numerous ups and downs over the regular season. At a lot of tracks, you need a bit of luck as well. Even if you have a good setup, things can not go your way. Unfortunately, at most of these tracks, it didn’t quite go my way. I had a top-five run at Auto Club, which I feel I could have very much won as well. At Charlotte, I feel like we had the best strategy again, but unfortunately a caution kept us from executing on it.

We had a few good runs at short-tracks though and then obviously Michigan came around. It was fuel knowledge at first, and then a caution put us up to the front. We just hung in there for the last few laps and managed to get the win, which ultimately saved us the playoffs.

A quick look ahead for the last lap magician offered some more useful insights into the upcoming races.

Darlington and Bristol stand out to me, I am really looking forward to them. Darlington got an update on iRacing so it is really low grip just like in real life. So far, it has been a lot of fun doing testing, and whenever it is fun to test, it motivates you to run more laps and keep pushing to find more pace. Bristol is another driver’s track, and I am always looking forward to those.

Obviously not looking forward to Talladega because it is the cutoff race. But in case results don’t go my way in the first two races, I will be looking out for it because anything can happen there.

We here at OverTake wish all four of these racers the best of luck for the first race of the playoffs tonight, Tuesday 31, 2021. Be sure to tune in to the official iRacing YouTube channel where you can watch the race live.

Who do you think has the best chance to smash the playoffs? Tell us on Twitter at @OverTake_gg or in the comments down below!