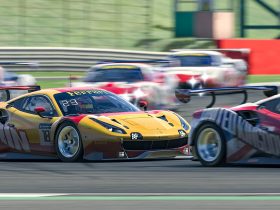 VCO on how to deliver action from the first lap

The dedication it takes to be a sim racer is remarkable. The commitment to be a sim racer regardless of whatever the circumstances might be is admirable. We spoke with Max Spooner and James Hall from eTeam Brit, a crew for sim racers with disabilities. Most of the members have varying sorts of hurdles they had to overcome to become a sim racer, but at last, they did it. As part of our inclusivity week, we had the chance to get an insight into how the journey began and where it is going.

OverTake: What are you guys up to at the moment?

We’ve just done the GT Challenge at Bathurst, where we’ve had Jenson Button join us, which was pretty cool. Then we had the GTR 24h race at Indianapolis and we’re in the process of preparing for the next GT Challenge race at Adelaide, which Jenson will be joining us for again. But we’re also preparing for the Daytona 24h as well.

OverTake: How do you prepare for this amount of races in such a short time?

It’s team effort, really. We just prioritize which race is more important. So we sit down as a team, work out who is driving. And once we sort everything out, we just practice.

One thing that we particularly focus on is trying to almost specialize in GT. Because if we can learn one car, we find it makes the preparation a lot easier, when we are changing tracks or for a different event. So that’s our baseline and we can progress and develop from there.

OverTake: The eTeam BRIT is undoubtedly a great initiative that has set an example in sim racing. How did you actually get there?

I originally met Dave Player, the CEO of Team BRIT, when I was running a tool company. He ran a charity kart racing team that rehabilitated injured troops through motorsports. From that he developed Team BRIT, and that’s how I started following and getting interested in the team. Later they expanded to not just injured military personnel but disabled people in general. The former team manager was advertising that Team BRIT was starting an esports team for disabled drivers. So it kind of went from there, really.

I was just with another esports team, because with my fatigue I couldn’t keep up, obviously. That’s bad, especially for endurance races. I was pretty annoyed at that, but I suddenly noticed a 6h iRacing event on RaceSpotTV. It turned out to be Team BRIT and I did some research on it. So, I was like “Yeah, that’s a team I want to join”. These people have got the same understanding of my limitations.

OverTake: Max, you’ve mentioned that you are on the autistic spectrum. May I ask what type of autism you have?

I have Asperger syndrome. I was diagnosed back in 2004, when I was 11 years old. At that time, I had no idea what it really is and I didn’t know what it means for me. I always knew I was a bit different or a bit odd. But I suppose autistic people generally are, it’s the way our brains work. You know, we see the world in a very different way. For me it was always a learning thing and school was particularly tough.

I think the turning point was probably the Paralympic Games in London. All of the sudden there were all these disabled people showing me what I can do despite my disability. It changed my perception.

OverTake What about you, James?

I have two disabilities that I can name. I have fibromyalgia and that’s evil some days. There’s pain every day, like normal and fatigue. Some days it can be really bad and some days it can be really good. But the worst one I’ve got is called chronic fatigue syndrome. The fatigue is a bit problematic in endurance races, I won’t lie. I have to do special preparation during the week to be able to sustain it. But it’s just about learning what the limits are and adapting to them, making sure you don’t overwork.

I’ve never been on the pace of the quick guys in sprint races, especially when I was younger. The joke was: the longer they leave me in the car, the faster I get. In my first endurance race I ended up doing the first four hours, although the plan was actually to do single stints to keep the energy going. It made me realize that my limit was more than what I was and ever since then I’ve been trying to push it a bit more every time. It’s about management.

OverTake: You also develop and construct special equipment for your drivers to suit their disabilities. Would you call yourselves sort of pioneers in this field?

Well, I guess you could say that, but without sounding big-headed, we are always looking for ways to trying make sim racing as accessible as possible. There are disabilities we haven’t developed products for. But if a driver came to us and really loved to race with us, we would look for a way to help them get into sim racing. Whether that be chassis adjustments in the racing rigs, to the seats, to the wheels, to the pedals.

For example, Nicolas Hamilton, Lewis’ brother. He has driven with us previously and tested one of our cars. You’d notice that his pedals are vertical, which has been developed over the time. It’s just because of his cerebral palsy and the way his legs are formed. So that’s the most comfortable way for him to drive. And that’s what we do: We just look for ways to make motorsports and sim racing accessible.

OverTake: Do you have a favorite memory when it comes to sim racing?

Yeah, I’ve got two. Unfortunately, my mother passed away back in 2012 and I remember being on the grid that night for a race on Forza. So, every time I do sim racing now, I think about my mom. You know, tell her that I love her before I get in a car. And the second memory would be the iRacing 12h of Sebring in 2020. Our eTeam BRIT had three cars over two classes. One of them was the BMW iRacing class with my co-drivers Sandro Ballesteros and Paul Wignell. I’m not proud of it, but I crashed in qualifying, so we had to start at the back of the GT field. But we were like: “No matter what, we don’t quit. We could be in the pits for three hours, but we just don’t care. We get a car back out and go around again”. And it ended up being the best result we ever had.

One of my proudest moments in sim racing was last year. We entered a “Racing with Autism International” car. We took the four fastest real-world autistic drivers. We had Sandro Ballesteros, Bobby Trundley, our Aston Martin GT4 driver, Armani Williams and Austin Riley. The four of them, with me as their crew chief and spotter, took on the iRacing 24h Le Mans and we were to first all-autistic team to embark on that challenge. We started 50th, dead last, and brought the car home in 23rd. It was quite surreal, because up until four weeks before the race Sandro, Bobby and me didn’t even know Armani and Austin. But it was also fascinating to learn about different coaches and attitudes to autism over in North America. It was a really good experience to share that moment with them and bring home that result.

OverTake: Max, what are your ambitions for 2021 and the future?

Like any esports team, we want to compete in the biggest and best events in the world against the biggest and best teams. I think, on a wider scope we really want to become the voice for disabled sim racing. I’d love to work with the game developers, the equipment and chassis manufacturers. And maybe even work with the governing body FIA. I’d love to be able to make our sport more accessible. But at the end of the day, to do all these things we need money. We’re not a charity, we’re a business. We have to go out there and make our guys commercially viable, for example through sponsorship.

OverTake:Is it problematic if someone says, “We affiliate with you guys, because it’s good PR for us”?

To be honest, there’s no shame in it. Because that’s what we want to do. If a company comes to us, giving us a platform to demonstrate what we can do, that’s totally fine with us. If a bigger company wants to associate with us, they’d give us that platform and a wider audience to show people what we can do. And if it means that we can inspire the next generation of disabled sim racers to come and enjoy our sports, then that’s all good in our book.

OverTake:James, what are your goals for 2021?

This year’s 24h of Le Mans. I have participated eight times now and have never managed to finish the race. But to be honest, I just want to keep up and having a laugh. And to keep the close bond that we’ve all forged with each other. It makes life bearable, especially when you can just pick up your phone or go to Discord and start talking away. You forget your problems and that’s nice when you have a really bad day. The whole team gets how you are feeling and that’s phenomenal. The way we are all basically arm in arm, supporting each other.

We probably talk every day, don’t we? If we’re not testing for an event, we’ll be on Discord chatting away. You know, the boys would be asking if anybody needs help with school and stuff like that. Because with have those age gaps. Not only can we teach them how to be better sim racers, but we help them with their disabilities as well. Just learning from our life experiences.

It’s quite funny, because when we go to a real-world event, we all know each other already, even though it’s the first time we’re meeting. When you think of autistic people going out and socializing, it’s like the scariest thing ever for them. We just try and make it an atmosphere that’s open. There’s no bullshit. You can be straight with people and nobody gets offended. We have our arguments, we always do. But I think the arguments always come because we all have the same passion for winning and changing perceptions.

Finally, there is only the best we can wish upon Max Spooner, James Hall, and the whole eTeam Brit, who continue to further inclusivity in the sim racing world.