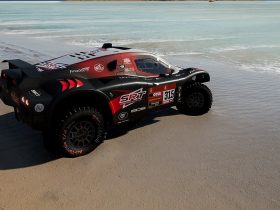 Dutch racing game content creator Maxime MXM about the new format of Clash of Racers II and her teammates in Team GREEN.

Clash of Racers II is right around the corner. On December 13, ten of the most beloved influencers in esports racing will compete against each other in a fun event on Twitch.

One of these heroes is Dutch content creator Maxime MXM. She has already been part of our first edition of Clash of Racers and now returns to claim the trophy for her Team GREEN. We asked the YouTuber what she thinks of the new show format, which game she will be excelling in and what she thinks of her teammates.

Hey Maxime, thanks for joining us! What does it feel like to return to the second edition of Clash of Racers?

It feels good to be back! I really enjoyed the first edition of Clash of Racers and I’m happy that I got another invite.

What did you like best about the first Clash of Racers?

What I liked about the first Clash of Racers is that multiple sim racing communities were brought together. We had a lot of fun and in these weird times with no real-life events it’s very good to have events like this and have a laugh together.

Check out the stream from @OverTake_gg on December 13! #Ad 👀 pic.twitter.com/Iy9SxOmPFx

Besides you, Dave Gaming and Jimmy Broadbent, there are many new faces who join us at CoR II. Who are you looking forward to competing with the most?

It’s great to have Jardier in Team GREEN. He’s a very nice guy and really quick driver. Besides being a fast team-mate I’m sure he’ll give us some tips so the whole team will perform better.

The line-up of games includes F1 2020, iRacing, ACC and Trackmania. In which discipline are we most likely going to see you on P1?

F1 2020 is my favorite game, so I hope to get some good results there. P1 might be a bit too difficult, but hopefully I can finish on the podium!

This time, Clash of Racers puts more focus on team competition with all drivers racing at once. Do you welcome this change?

I love this change! Now you’re not on your own if you have to drive and you can have more fun with the team. And if someone makes a mistake, there are still some others that can get a good result for the team. Besides that, the grid is bigger, so there will be more action during the race and it will be more entertaining to watch.

THESE TWO TEAMS RACE IT OUT IN CLASH OF RACERS II!

Do you have a special preparation routine going into the event or will you just let your instincts take over?

I don’t know the tracks yet so it will be difficult to prepare. And I don’t have that much free time to practice, so it will be an interesting event. But we’ll have fun, and that’s what’s most important.

Okay, time for banter: the last words are yours!

Don’t be mean, VOTE FOR GREEN!

MEET OUR TEAM CAPTAINS FOR CLASH OF RACERS II

WIN EXCLUSIVE PRIZES IN OUR CLASH OF RACERS RAFFLE

Are you supporting Team GREEN or Team RED? Follow us on Twitter at @overtake_gg for more information about Clash of Racers II!