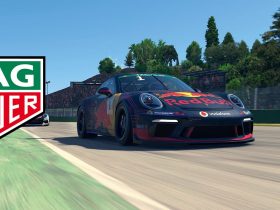 He and his team have dominated this season. Now OverTake have gained some insights into the how everything came together for Joshua K. Rogers.

It is a redemption story of its kind. The 2019 champion of the Porsche Esports Supercup, Joshua K Rogers came into this season of the 2021 Porsche TAG Heuer Esports Supercup with a chip on his shoulder. The young Aussie narrowly missed out on the championship last year and saw Sebastian Job victorious. While humble in defeat, Rogers was determined to set the record straight, which he did in style.

At a loss for words right now, 2 time #PESC Champion! Massive thank you to everyone involved, it’s been an insane season and it’s been a pleasure to share it with you all!

One things for sure though, we should probably stick to simracing 😜😅@CoandaSimsport @realVRS @iRacing pic.twitter.com/TdBAXOsyT5

A dominant season by Rogers and his team saw him almost 200 points up by the end of the last race. A whopping ten wins accommodated the season for the Aussie. OverTake had the opportunity to speak with the newly crowned double champion to get his thoughts on the past season.

OverTake: First off, congratulations on the championship! Amazing season from you and your team. What’s your recap of this season?

The season started back in January, and we began to prepare way early for that. At least a month before the first round. We felt great, and the pace was there. In the first round, I made a small mistake in the feature and ended up crashing out.

After that first round, I definitely didn’t expect the season to go as it did. But at the same time, after the first round, I was even more motivated to resolve the issues that plagued me in late 2020 as well. Patience is one of them and often not having the bigger picture in mind. I think I was a little too aggressive at that time. From that point onwards, everything kind of clicked though. I was more focused on consistency, and obviously, the pace was there. We were just chipping away, round by round. It was a massive team effort there is no denying that. We all worked so collectively together and brought it home. All in all an exciting season that I will remember and a tale of changing direction, I suppose.

OverTake: Coanda Simsport seemed head and shoulders above everyone in terms of raw pace. What do you attribute that to?

There is no going past our motivation. We all work closely together, and it’s not like we keep secrets from one another. If someone has a question, they ask and get an answer. It is just so transparent. Of course, it helps that we are all very approachable and get along so well. This way, we can all share our knowledge and help each other out. You can come up with outlandish ideas that wouldn’t work typically, but we can make them work. Our collective goal to always raise the bar is part of the success that the team has.

It has also been like that for the time being. Obviously, I haven’t been here since the inception of Coanda, but others have told me that this was always the way things worked around here.

If you want to get a closer look into how things work in the Coanda landscape, you can check out our Epic Factor documentaries on Josh Rogers and Mitchell DeJong.

OverTake: Has anything changed in terms of approach for you guys?

The biggest thing that changed was our pre-season testing. We put a lot of time into that, which made it similar to how it was in 2019. This way we weren’t left scratching our heads mid-season. The emphasis on the driving never changed, but we weren’t necessarily trying to find the fine details in the setup halfway through the season. This is also because the setup is almost fixed anyway. But due to our great preparation, we were able to focus a lot more. It’s similar in real life. If you start the season well, it gives you confidence and gets the ball rolling.

OverTake: How does regaining your championship compare to winning it the first time?

To be honest, it does feel even better this time. I am a very competitive person, and the feeling of losing just sucks. To put all of that aside and move forward to get the results this year makes it all the sweeter. Being the inaugural champion in 2019 was special, of course, but regaining the championship in 2021 meant a lot to me. Coming second in 2020 wasn’t good enough. To get the championship back in the way we did was just incredible.

OverTake: What or who surprised you the most this season?

I think it’s hard to look past Charlie Collins. It was ridiculous honestly, the way he came onto the scene. Just out of nowhere, especially when you saw him get his hardware upgraded, he was flying. His work ethic and his motivation, combined with his raw speed, are scary. That’s for sure my standout.

I guess it was a little surprising to see Sebi where he was. He was still ridiculously fast but just not as consistent in 2020. I feel like that was his strongest trait last year. He never put a foot wrong, and it put you as a driver in this situation that you had to work so much more complicated because of that. I’m sure he will bounce back next year, kind of like I did this year. Sometimes it takes losing to gain that extra bit of drive again.

For Sebastian Job his rivalry with Josh Rogers seems far from over. Even this year there have been some insane battles between the two.

OverTake: Did having Sebastian as such a rival to you kind of lift you to the next level?

Yeah absolutely. I think even without Sebi in 2020, my approach for this year would have stayed the same. But I think it did certainly raise the bar for me because I knew where I needed to be. Of course, you never truly know until you hit the track, but it certainly made me much more motivated in the pre-season. Because I knew he would be fast.

OverTake: You are a two-time champion now. Do you think you can start asking the G.O.A.T. question slowly?

I kind of hate the discussion, to be honest. I never look at myself like that because there is always room to improve. I think if I compare myself to the other two main guys on iRacing being Greger Huttu and Martin Krönke I don’t think there can be any way I am on the same level of success yet. What those guys did is just incredible. Greger won five championships, and Martin won three while winning every single race in a season. That is absolutely insane, and I don’t think we are at that stage yet. Sure it can be a goal, but unless something is equal to winning five championships or winning every single race for a year, there is no way of exceeding that.

OverTake: What’s next for you?

We will see what the future brings. At the moment, it’s recharging for whatever comes next. But we will still do all the things for V.R.S., like coaching, so I won’t get bored. For the next season the goal is, of course, to defend the championship.

We at OverTake certainly wish him all the best and can’t wait to see him in the future!

What do you think about Josh Rogers’s second title run? Tell us on Twitter at @OverTake_gg or in the comments down below!