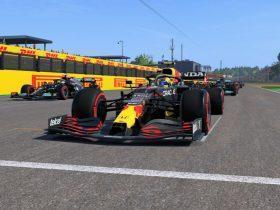 Fancy watching a movie about sim racing? American director Brock Drury has you covered, as he is producing a feature length film about a sim racer which will be streamed early 2022.

Racing movies are very few and far between. With how expensive motorsport is, making a movie about motorsport can be even more so and there’s never any guarantee that it will be a box office success (unless it’s about NASCAR) since the racing community is still relatively niche. It’s an unfortunate truth and often results in mostly documentaries being made and rarely ever a proper film with actors.

But when they come along and are great, it’s a real occasion. There are two high profile examples. One is the 2013 Ron Howard-directed Rush, which depicts the titanic battle for the 1976 F1 championship between James Hunt (Chris Hemsworth) and Niki Lauda (Daniel Brühl). The other is James Mangold’s 2019 movie Ford V Ferrari (Also released as Le Mans 66 in other territories) that followed journeyman Ken Miles (Christian Bale) and racing legend Carroll Shelby (Matt Damon) as they tried to help Ford topple Ferrari at the 24 hours of Le Mans in the 1960s.

Go on the ride of your life with Matt Damon and Christian Bale! Academy Award nominated #FordvFerrari is on Digital and Blu-ray TODAY! https://t.co/tTo7ifY0yV pic.twitter.com/44V2apqaGn

When the motorsport world came to a grinding halt in the first part of 2020, many real world racers took to their simulators to keep sharp. The events that resulted brought in a huge influx of viewers who weren’t aware of how brilliant the virtual world can be for competitive racing. So now would be the time really to make a movie about sim racing.

There were efforts by Sony to make a Gran Turismo movie, they had even tasked producers Mike De Luca and Dana Brunetti (who both produced the Oscar-winning The Social Network) with getting it made. There were heavy suggestions that the film would have been focused on a gamer who goes through the GT Academy program, however it would seem the project is dead in the water and that’s a real shame. But no matter, as there is a movie about sim racing on its way, it will release soon and it’s called The Sim Racer.

From The Horse’s Mouth

The film is the brainchild of a man named Brock Drury, who wrote the script throughout early 2020. Drury was kind enough to chat with us about the movie.

OverTake: What inspired you to make this film?

I’ve been sim racing since NASCAR 3 came out in the late 90s and as someone who works in media production it’s been a goal of mine to make a feature film for a few years. Last year I decided it was the right time to do it. I decided to make a movie about sim racing because there are no other sim racing movies.

OverTake: Can you give us the synopsis?

Yeah, Luke Wallace the sim racer is down on his luck after he finds out his home is in danger of being foreclosed. Luke, being an avid sim racer, decides the best way to get the money is to enter one of the biggest sim races of the year that pays $20,000. It’s a simple concept but keeping it simple works sometimes especially when it’s your first feature film.

OverTake: Currently, where are you in the development of this movie?

Right now we’re in post-production. The movie is close to being done there are just some things we have to tweak and polish before it’s ready for release.

OverTake: Does the success of racing movies whether big-scale like Rush and Ford v Ferrari or smaller-scale like the Australian movie Go Karts give you hope that this film has an untapped and strong audience and that it could be successful?

OverTake: The world of racing is vastly under-represented in media, let alone sim racing. With the mainstream audience not being too aware of sim racing, do you believe the way you’re going to represent sim racing in this movie will help get people interested in the scene?

OverTake: Might you have ideas should this movie be financially profitable and sequels be ordered?

If the movie is financially successful, I could definitely see there being sequels or spinoffs if there is interest.

With the team working with an independent movie’s budget, the small-scale plot may make people think that it could be so much more. But if the movie is a success, there’s so much potential that could be explored in the future. Plus we could be seeing more media centred on sim racing.

But that’s all dependent on if The Sim Racer is successful. Be sure to follow them on Twitter, Instagram and Facebook to find out when they have updates. They intend to release the film on Prime Video so if you have access to the service when The Sim Racer does become available, you can watch it in Spring 2022.

Are you looking forward to watching The Sim Racer? Tell us on Twitter at @OverTake_gg or in the comments down below!