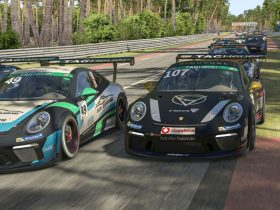 All you need to know about the new PESC season

What makes an esports racing event special? Florian Haasper from VCO has the answers.

What would esports racing be without exciting tournaments? The Virtual Competition Organisation (VCO) aims to bring the different parties in the scene together, connects teams and drivers with potential partners and supports events to bring the esports racing scene to the next level. We invited Florian Haasper, CEO of VCO, to talk about their latest operations, the challenges of creating content and what makes racing events special.

Hello Florian. The VCO was founded earlier this year, right before the corona lockdown. How was your experience of that time?

Obviously, the corona lockdown changed a lot for esports racing in general, not just for the VCO. Our mid-term plans had to be revised; suddenly there were sim events everywhere. So we re-assessed the esports racing landscape, talked to many different stakeholders and did what we do best: start to work. One positive effect of lockdown was that many, many people saw the potential of esports racing. That’s a solid basis to build on.

Building up a YouTube followership isn‘t easy these days. But I‘m happy how we have developed our channel over the last months! https://t.co/M5HvMwTKKF

Which opportunities arose with the lockdown situation? How much do you still benefit from the boom in spring?

I have always been sceptical regarding the term ‘boom’. With so many famous real-world racers being willing to do esports racing for free and with so little sports activities going on, virtual racing certainly got to the forefront and reached many people. That was positive. But the more interesting question was ‘who will still be there and interested once things are a bit more normal again’. Our goal has always been to remain there and to build something sustainable. That’s what we are still working on – and I’m positive that it will work out.

How successful have big events like the Cup of Nations or the 24 Hours of Le Mans been from your perspective? What did the VCO learn through those events?

I think all the events you mention would also have been ‘successful’ without us. iRacing Special events have been there for years, for instance. What we wanted to bring in was a reliable level of communications and content quality. We tell background stories, work with amazing photographers and videographers, publish press releases about VCO-related events, etc. The goal is to establish sort of a trademark. If VCO is involved, this is going to be a great event – not just on the track but also in terms of communications. Working with partners like iRacing, RaceSpot TV, Radio Show Limited and Williams Esports enabled us to prove that point to the community and to brands considering getting involved in Esports racing.

You have already organised plenty of virtual endurance races, like Le Mans or the 24 Hours of Spa-Francorchamps in iRacing. Which challenges does an organiser have to face when it comes to this type of competition?

As mentioned before, for events like the VCO iRacing Grand Slam, the Digital Nürburgring Endurance Series powered by VCO and the VCO Cup of Nations, we work with partners who are extremely experienced when it comes to organising esports racing events. VCO is not really needed for the mere organisation of the events. That’s what I love about esports racing – generally anybody can set something up and get a cool event or series going. Communications can then make a huge difference once the event is established. How good is social media coverage? How professional is the live broadcast? Is the event attractive enough for strong teams and drivers? That is where we try to bring in our expertise.

Does the future of esports racing lie in new and innovative competitions such as the Cup of Nations or in classic formats like 24 hour races?

The right mix is key. The VCO Cup of Nations was amazing. So many different tracks, cars, and types of racing… The drivers loved it, and the esports racing community as well as far as the reactions were concerned. But if you look at the huge participation figures at the big iRacing endurance events, then you can see that the good old concept of a 24h endurance race works as well. VCO will always push for both: exciting events that attract new fans from real-world motor racing as well as new formats where we can show that esports racing allows for events that would be impossible to stage in reality.

It’s RACE DAY! And we cannot wait to get the @iRacing 24h Spa-Francorchamps powered by VCO started! So many great teams and drivers announced their participation.

What makes an esports racing tournament tense and exciting? What do you need to keep in mind while planning?

For me personally events need to be crisp, easy to understand for the viewers (and the drivers), deliver action from the first to the last lap and be professionally communicated. Fans expect great pics, gripping videos, polarising hosts, and all that. Don’t get me wrong, not every esports racing series needs to build such an environment. It’s all about having fun – and that can be achieved in a private league as well! But if you want to create a professional product that has the potential to reach people outside the esports racing bubble as well, then you have to think carefully about how to set your event up.

What can esports racing organisers do to attract attention of potential viewers, who are not already familiar with the scene?

The events need to become more unique – and they need to have elements in them that address both motor racing fans who could be converting to esports racing and esports fans who could be converting to racing. For that, you will need well-known faces from both worlds, strong brands involved and partners that equally believe that esports racing has huge potential for growth.

In a Tweet referring to our column “How esports racing misses its biggest chance“, you promised: “Development is in full swing, many ideas are in the pipeline.” Can you elaborate further on what you have planned and give us an outlook?

We want to create a network of VCO-partnered events that helps to structure the esports racing season. The VCO iRacing Grand Slam is a big pillar for that. The success of the VCO Cup of Nations gave us confidence to develop the concept further with Williams Esports, who had the initial idea, and RaceSpot TV. We are in positive talks with several other series to bring the VCO label to even more existing events. Additionally, we are planning to launch our own championship, in which we will try to execute what I’ve said before: creating a series that is crisp, exciting to watch and relevant. More news on that will follow at a later stage!

Thank you Florian Haasper for your time!