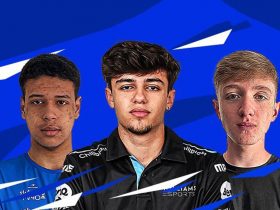 After winning back-to-back championships on the F1 game on the PlayStation, 16-year old Wilson Hughes is impressing amongst some of the best in F1 Esports. He has now become a part of the McLaren Shadow team.

The 2021 F1 Esports Series Pro Championship season is set to begin on this upcoming Wednesday, 13 October, and there are many drivers who are of major interest. There’s Jarno Opmeer who will be gunning for a second consecutive championship with a whole field of other top tier drivers aiming to prevent that from happening.

Opmeer and many others have been consistently active in league racing, with Premier Sim Gaming Leagues and World Online Racing being just some of the many communities where you could see the top esports drivers and budding future prospects competing. One such prospect is Wilson Hughes, who made his competitive PC debut in PSGL midway through the season after winning consecutive championships in PSGL’s top PlayStation tier.

We’re delighted to have both @tomek_poradzisz and @WilsonHughesss on board with the McLaren Shadow Academy for the 2021/22 F1 Esports Season ✨ pic.twitter.com/cx9NP47KSQ

While Jarno Opmeer has just sealed his second consecutive championship in Premier Sim Gaming Leagues’ top PC tier, he also originally came from the PlayStation side and won the top PlayStation tier a few seasons ago. So while most viewers traditionally flock to watch the top PC races, consoles have clearly proven to also house some potential future prospects.

The 16-year old Scot has now just signed for McLaren Shadow academy alongside pre-existing member Tomek Poradzisz after former academy member Josh Idowu graduated up to the main team and will compete in the Pro Championship alongside Bari Boroumand and Daniel Bereznay.

Initially known by his gamertag Sparkz, Hughes’ rise to prominence has been immense and being part of McLaren’s esports academy will no doubt put him in a good position in the future to follow in the footsteps of Idowu. As such, we were interested to talk to him and get to know more about a driver who has followed a path like his.

OverTake: How did driving competitively in league racing begin for you?

I think it began two or three years ago, one night I was looking through PS4 communities trying to find a place to race in online. Before then, I’d do nine seasons in career mode just for fun because I wanted to race.

But I wasn’t getting enough thrill from it, so I found myself looking at community pages. A guy messaged me, I joined a small league called SSR and then from there I joined PSGL, and just grew from that.

OverTake: You’re a two-time PSGL PlayStation champion, you just made the move to PC and impressed immensely, and now you’ve signed for McLaren Shadow as an academy driver. When did that process begin?

The signing to McLaren, that happened ages ago, I’ve known this since about February-ish time so it’s been pretty difficult to keep my mouth shut. I actually got signed before I won even my first PSGL PlayStation title, a lot of people make the misconception that I got the McLaren Shadow drive from winning the titles but it was after I won the Monaco race (in PSGL Season 27) by about ten seconds, I got in contact with Veloce Esports (who operate McLaren Shadow), so it all came rather fast at me.

It took long to get announced as it was only about a week ago but I still wake up every now and then thinking “Is this true?”. I remember thinking about a year ago “Oh wow, am I actually going to get signed by Veloce?” and here I am! It’s quite surreal.

An #F1Esports star of the future and he will always be a PSGL legend! pic.twitter.com/dUj5zHK6ou

OverTake: You join four very highly rated drivers in McLaren Shadow’s F1 Esports team in Dani Bereznay, Bari Boroumand, Josh Idowu and Tomek Poradzisz. What will your role be alongside Tomek and how have they all welcomed you into the team?

Me and Tomek’s roles as academy drivers – since we aren’t eligible to compete in the series due to age – is to just help the main guys at McLaren with setups and generally practice with them, try to give them a benchmark. Though you would hope they’d want to be quicker than us at the moment.

Our main goal is to help as much as we can, take less stress off of them, less pressure, make it as easy for them as we can so they can just practice and drive.

It’s been fantastic, getting into the team and they’ve all been very welcoming. Tomek was probably the most welcoming, I talk to him quite a lot and the same with Josh and Bari. I’ve not spoken too much with Dani but in general they’ve always been extremely welcoming.

OverTake: With how stacked the talent is in F1 Esports and all four of your teammates being so immensely highly rated, do you feel concerned that there won’t be anywhere for you to go when you are eligible to compete?

I don’t really worry about these things right now but I’m not going to try to lie and act like it’s not in the back of my mind, it’s on everyone’s mind even the main drivers that there are two academy drivers waiting. It’s a rough business, if you’re in then you’re in and if you’re out, you’re out.

You’ve got to be quick, they’re not going to sign somebody slow just because they like them. It’s just how it works. If I’m not quick enough by the time I can get a seat, then it is what it is. I can’t change that. I’ll do everything I can in my power to earn a drive, I’m sure the main drivers will do what they can to retain their seat.

There are a lot of drivers who can be in F1 Esports that would deserve it but it’s all about performing at the right time.

One last look at the final standings…

OverTake: Since you appeared on everyone’s radar from PlayStation, how important is it that the talent from console not be overlooked as potential future stars since PC is often where the main competitors tend to be?

Teams are looking at every league (regardless of platform), you may not think it but they are looking at every race you do, they see your tweets, everything. So I can definitely see people get scouted from PlayStation but as time goes on, it’s getting less and less. More people are going to PC, that’s becoming the main attraction.

I don’t know if it helps the people like Joost, Blizard, Duncan, Midnight (some of Hughes’ very highly rated competitors on PlayStation) and many more, that they all were competitive against me. If anyone wants to sign them, I don’t know. They might need to go to PC and prove it with the big boys to get a seat, it is just how it is. But they’re all more than capable.

Naturally it’s becoming more centred on PC (due to the Pro Championship using PC) and PlayStation and Xbox are slowly dying off unfortunately.

OverTake: What are the words you’d want to be heard by people who are currently trying their utmost to follow the same path as you? What do they need to know?

Three years ago when I started, I didn’t have a clue about esports as I just did it for fun. It was a year later that I realised that this could result in me racing in esports. It never really processed that I was quick enough to may be esports level, there are still days I believe I’m not quick enough and have massive moments where I doubt myself. I’m sure everyone has, we’re just human aren’t we?

Wilson is just one of many future prospects for F1 Esports, the earliest we can potentially expect to see him compete is 2023 when he becomes old enough to be eligible to compete. Until then, you can see him competing in the next season of Premier Sim Gaming Leagues‘ top PC tier as well as on the PC side for the upcoming new season of F1 Esports Challengers. You can find Hughes on Twitter and YouTube.

This current PSGL season was restructured as a lot of the drivers in the top PC tier had to start prioritising the Pro Championship. As such, their season was cut short, ending last Thursday at the new Portimão circuit. However the rest of the tiers go on until December, and you can watch Hughes’ old PlayStation contemporaries competing on Monday nights on the Premier Sim Gaming Leagues YouTube channel.

PC calendar only applies to F2-F5

Season 30 to begin in January pic.twitter.com/exrHyqft09

Also note down in your diaries that the first round of F1 Esports Series Pro Championship is this upcoming Wednesday from 13-14 October. You can read up on who will be competing in our preview.

Who are some future F1 Esports prospects? Tell us on Twitter at @OverTake_gg or in the comments down below!