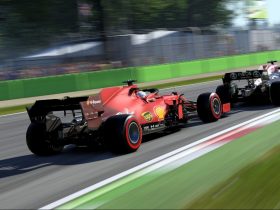 The Key Differences between F1 Esports and F1

His unmatched passion for Formula 1 made Benjamin Daly move to the other side of the world.

“I literally just wanted to show off my races to my friends and it turned into this,” Benjamin Daly says in a video podcast with AlexZAfRo. The Australian also known as Tiametmarduk is sitting in his apartment in the United Kingdom, half the world away from his homeland. The reasons why he has been able to travel and finally move around the world can be seen behind him: the outline of a racetrack, several trophies and a YouTube award. This is the story of Formula 1’s most successful content creator.

From Crash Bandicoot to Formula 1

The fact that Ben ended up in esports racing is no surprise if you look back to his childhood. His dad had always been very passionate about motorsports. “Obviously, Ben would watch when I would watch, too,” he tells in a video of Veloce Esports. Benjamin attended his first V8 Supercars race in 2003 and immediately loved it. “Seeing the cars fly by at top speed, the sound of being at a track. […] It’s just the whole package that comes together which is incredible,” he adds.

At the same time, his interest in video games began to grow. Ben’s first video game was Crash Bandicoot for PlayStation 1 which then led to his first racing game: Crash Team Racing. From then on, both his passions for real and virtual racing were fueled.

In 2010, Ben got his hands on F1 2010, not knowing that this game franchise would change his life entirely. “I remember him bringing the game home,” his father tells. “I couldn’t get the game out of his hands. I had to hide it at times so he could get his work done.” After playing the first online races, the Australian felt frustrated by trolls and people intentionally taking others out. Therefore, he signed up for Apex Racing League, one of the best virtual F1 competitions in the world to date.

Around a year into league racing, Benjamin discovered people uploading their online races to YouTube and followed their example. His first YouTube video, a hot lap of Bahrain in F1 2010, was recorded by facing a laptop camera to his gaming screen. “It was never an intention to blow up on YouTube or make it a career,” the influencer told AlexZAfRo in his podcast.

However, the first hundreds of subscribers quickly came in as the quality of the videos increased and Ben started uploading setup guides. “Good setups were harder to come by. You couldn’t download the fastest time trial setup back then. There was a real benefit,” the Australian continues. “Nowadays, they don’t even work anymore on my channel, so I do other stuff.”

Two years after uploading his first clips and building a small community, things began to accelerate for Tiametmarduk as he remembers in the video of Veloce Esports. “A pivotal series for me was the beginning of career mode. It really took off for F1 2013.”

After starting his first F1 career video series, Ben’s subscriber count doubled from 7,000 to 14,000 people within a month. His career mode videos since then have become the flagship of his channel. The mix of high-level gameplay, the ark Ben builds over the season as well as his exciting and skillful commentary is what people still adore about his career videos today.

Dad, I will be a full-time YouTuber.

However, there was a time when it was not really clear where the channel Tiametmarduk would go. “2014 whirled around and it was a game changer,” Ben remembers. As his channel grew bigger and bigger, the university attendee thought of quitting his studies to become a full-time YouTuber. Benjamin’s father was not convinced of this plan, as he tells in Veloce’s video: “I questioned where this YouTubing would be going. I suggested to Ben that he might think of doing this in the background and continued with his studies, because he had already completed six years. And I said to him he would’ve wasted those six years for nothing if he didn’t finish the degrees.”

His dad even included Ben’s grandparents to have a word with him. But the esports racer had already made his decision. “Fun fact: technically speaking, I am still in uni. I never out-enrolled from it,” he told AlexZAfRo, laughing. “By 2014 with the new game coming out I said: Yeah, I am 100 percent doing YouTube. I’m not going back [to university] anymore.” Although he was against this plan initially, Mr. Daly tells he is very proud of what his son achieved so far. “It has turned out to be a real success for him and continues to be. It’s taking him across the world and will take him further.”

Becoming a big name in Formula 1?

Time has shown that Benjamin’s decision was brave, but also good. His channel broke the sonic barrier of 100k subscribers at the end of 2015 and the viewer counts accelerated more and more since then. In 2018, the Australian joined Veloce Esports, one of the biggest organizations in esports racing. One year later, he made the big step of moving to the United Kingdom, half the world away from home soil, to be closer to his organization and the F1 circus. Today, he is the most successful Formula 1 YouTuber, with more than 550,000 subscribers.

His success also helped Ben to get in touch with real Formula 1. The Australian travelled to several Grands Prix around the world and met some of the biggest names in the sport. His contact to F1 and Veloce resulted in the most exciting time of his career so far. In spring 2020, Ben raced together with real F1 drivers in Veloce’s #NotTheGPs. Lando Norris became his race engineer for a race in Monaco. The #NotTheDutchGP, where he fought against Charles Leclerc for the entire Grand Prix, is what he named “the best race of his life.”

“Pinch me, I still can’t believe all this happened,” Benjamin writes in the description of his highlight video about those crazy months in 2020. But it did, and it opened doors the Australian probably never imagined would open. “For my future, I’d love to continue to bridge the gap between esports, virtual competition and real life. To try and show the possibility that esports is the grassroots into potentially real-life racing,” Benjamin says in the Veloce video.

The YouTuber has always strived to create new, innovative content and improve his formats over and over. This passion for Formula 1, together with his talent and the contacts he already made is going to help him to achieve his goal. Almost ten years after he uploaded his first video on YouTube, we believe Tiametmarduk has just finished his opening lap.

What is your favorite video of Tiametmarduk? Tweet us your opinion at @overtake_gg!