Our latest tutorial lists five of the most common rookie mistakes you can make on Codemasters' F1 2020.
Photo credit: Codemasters

F1 2020 may not be the peak of racing simulation, but it still features many of the complexities and nuisances of real-world Formula 1. Our guide points out five of the most common errors that rookies (and even some seasoned F1 Esports drivers) can make when playing the latest instalment in the F1 game franchise.

1. Burning through your ERS too quickly

Codemasters overhauled the ERS system for F1 2020, introducing a simplified overtake button for the races. However, it’s still a complex process to manage your ERS correctly and it’s easy to be left with an empty or drained battery.

Focus on deploying the overtaking button on the exit of corners to get the maximum benefit. There’s little point in deploying it as you close in on the braking zone. You may wish to use it to get a good getaway at the start of the race but keep an eye on your ERS percentage, so it doesn’t fall below 20% in the opening few laps. 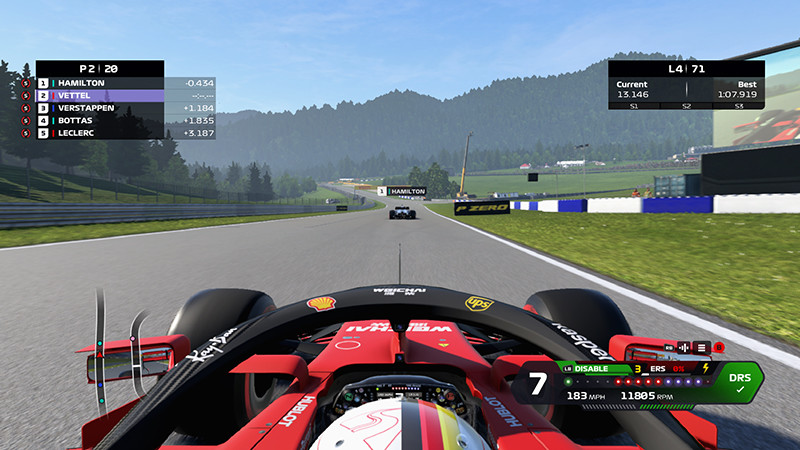 Use safety car periods to regenerate ERS by braking more often than you usually would, to re-generate extra energy that you can deploy when the race restarts. You could of course turn on the automatic ERS mode, but where is the fun in that?

2. Running out of fuel

This one may appear to be an obvious statement. But it is surprising just how many professional sim racers, let alone rookies, can fall victim to the age-old embarrassment of crawling to a halt on the final lap with an empty fuel tank. It can be easy to forget about your fuel when you become too focussed on a frenetic last-lap battle or are simply too distracted by counting down the laps in a monotonous race.

When your fuel level dips below the amount required to finish the race, you’ll get a yellow flashing light next to your speedometer that will turn red if it remains critical. This light can be easily missed.
If you haven’t adjusted your fuel settings by the final lap and you’re still in a deficit, you’ll enter low fuel mode and limp to the chequered flag.

There’s not a more embarrassing or disheartening way to end a race as you watch your rivals sail by your ailing car and demote you further and further down the order. So better make sure you always keep an eye on your fuel level – especially at fuel-critical circuits such as Baku or Bahrain – to avoid last-lap heartbreak.

3. Speeding in the pitlane

Another seemingly easy task is slowing down to the pitlane speed limit before making a pitstop. However, as we saw throughout the 2019 F1 Esports Pro Series, this is no simple task. More often than not, risking a five-second penalty really isn’t worth the extra tenths of a second you gain from hitting the speed limit millimeters before the pitlane entry line.

Pit entries at circuits like Monaco and Monza can be particularly difficult. If you’re carrying damage, you’ll find it even harder to slow down to the required speed. 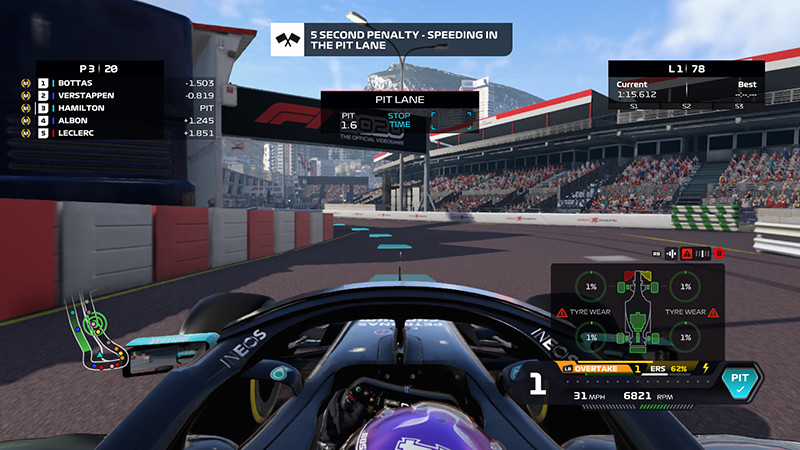 Speeding in the pitlane can result in crucial five-second penalties.

4. Having an over-reliance on flashbacks

F1 2020 features an option to have unlimited flashbacks, which enables you to rewind every mistake you make on track. Turning on this feature can lead to an over-reliance on being able to erase your errors and have another attempt at perfectly hitting every apex in qualifying or coming out unscathed in a 50/50 overtaking maneuver.

When you start racing online, this safety net will not be present and you’d have missed out on the learning experience of judging where your limit is in qualifying or the consequences of bold overtakes in the race.
If you’re new to the game, flashbacks can save you from a lot of frustration but consider limiting the use of them to three or four occasions rather than opting for the unlimited flashbacks feature.

5. Expecting to be an F1 Esports pro on day one

The final and arguably most important rookie mistake to avoid is believing you’ll be at the level of an F1 Esports driver within a few hours of playing the game – or even a few weeks. Sim racers may make it look easy, but you have to remember that for the majority of them, it’s their full-time job and they’re often supported by a whole team of people.

Try not to be disheartened if you find yourself several seconds off the top of the leaderboards, get your head down and keep putting in the laps. Many sim racers post videos of their hotlaps, which you can watch to find braking distances and the optimal racing lines that aren’t always what the game suggests.

Make sure to watch how they maintain a competitive speed over an entire race distance, as well as the secrets of being fast over a single lap. You can also compete against a ghost of the fastest leaderboard times in time trial.
Did you like this article? Please click thumb up or thumb down.
Tell us more
Tags: tutorial, codemasters, formula 1
By clicking on one of those buttons you are leaving OverTake.gg