Job: I thought of stopping to race after winning

2020 marks the year Sebastian Job has done it. He is a world champion. Throughout this season of the 2020 Porsche TAG Heuer Esports Supercup, Job has consistently performed on an outstanding level and was rewarded for it. The Briton was leading by a large margin when the field took to the final race last Sunday. After another stellar performance Job finally secured the championship of the Porsche Tag Heuer Esports Supercup. We invited the reigning champion for an interview to talk about his victory.

Congratulations on the championship title! How does it feel be the world champion?

Sebastian Job: It's quite a big relief, more than anything. It took a couple of hours to sink in. I've never won a world championship, and this was the aim from the start. So it's one of my life goals completed.

When I first started sim racing, it didn't seem possible as I was looking at these big names. There were Huttu and Krönke at the front, and I was fighting for 20th place. I just thought that it's awesome to even race with them. Last year when I finished third, I realized there was a good chance I could win it the next time as long as I worked harder.

What did you change, if anything, in order to become faster?

Sebastian Job: The main thing is more practice, but I also upgraded all my equipment which gives you a bit more car control. Last season, there was a race at Spa where I was fighting for the win, but I spun off at turn one. I think if I had this wheel and pedals last year, that would not have happened. And having three screens now just means it's easier to avoid accidents.

I also switched strategies as I realized its more about averaging good results. It's better to finish top five successively instead of winning one week and then crashing in the next, so I played the long game.

What did you change in your practice regime? Do you just practice more often or differently?

Sebastian Job: Both actually. I have practiced about double the amount I did last season. But mainly it was more about changing the setup for me. After I got up to speed with the track, I would just tweak the setup way more than before.

Also I have kept track of a lot of stints this year. I have done practice races over and over again and kept track of everything in a spreadsheet to get just a tenth out of the stint. That's the main thing. It helps so much with the consistency.

And how did it feel to be the one to beat Joshua K Rogers?

Sebastian Job: Quite a relief again. From racing Josh in the past, I know he is always going to nail it until something happens that is out of his hands. He's not going to spin in the middle of the race or mess up his qualifying lap, so it was 10 rounds of having to perform at the absolute best. But the battles we had on track this year were phenomenal, we had fights with only centimeters between our cars. Winning against him was quite a relief, because in my opinion, Josh is the fastest guy in iRacing.

Massive thanks to everyone in the team for their efforts this season week in week out! And of course a massive congratulations to @G2Sebi and @redbullracingES on their stellar flawless season, deserving champions! Looking forward to having these battles again next year! pic.twitter.com/v7TmrNwLux

What was your favorite race or memory in this Supercup?

Sebastian Job: As mentioned, I had some crazy battles with Josh. At Road Atlanta we were side by side for around half a lap. But my favorite race of the season was probably Spa. That day, we thought we were really slow. But then I managed to get pole position and maximum points by winning both round one and two, which was the first time anyone has ever done that.

How did your cooperation with your teammates work?

Sebastian Job: It was really helpful for me. Mostly we helped each other with setups. It was trial and error mostly. Like one person would try something and say they love it, and then the others would give their take on it. Then it would become a matter of interchanging knowledge, because I have a different idea from Patrik or Graham. Often, it's just random thoughts like: "Is this how the car works? I don't know but let's try it anyway". We try to think about it logically and that is usually where the ideas come from. 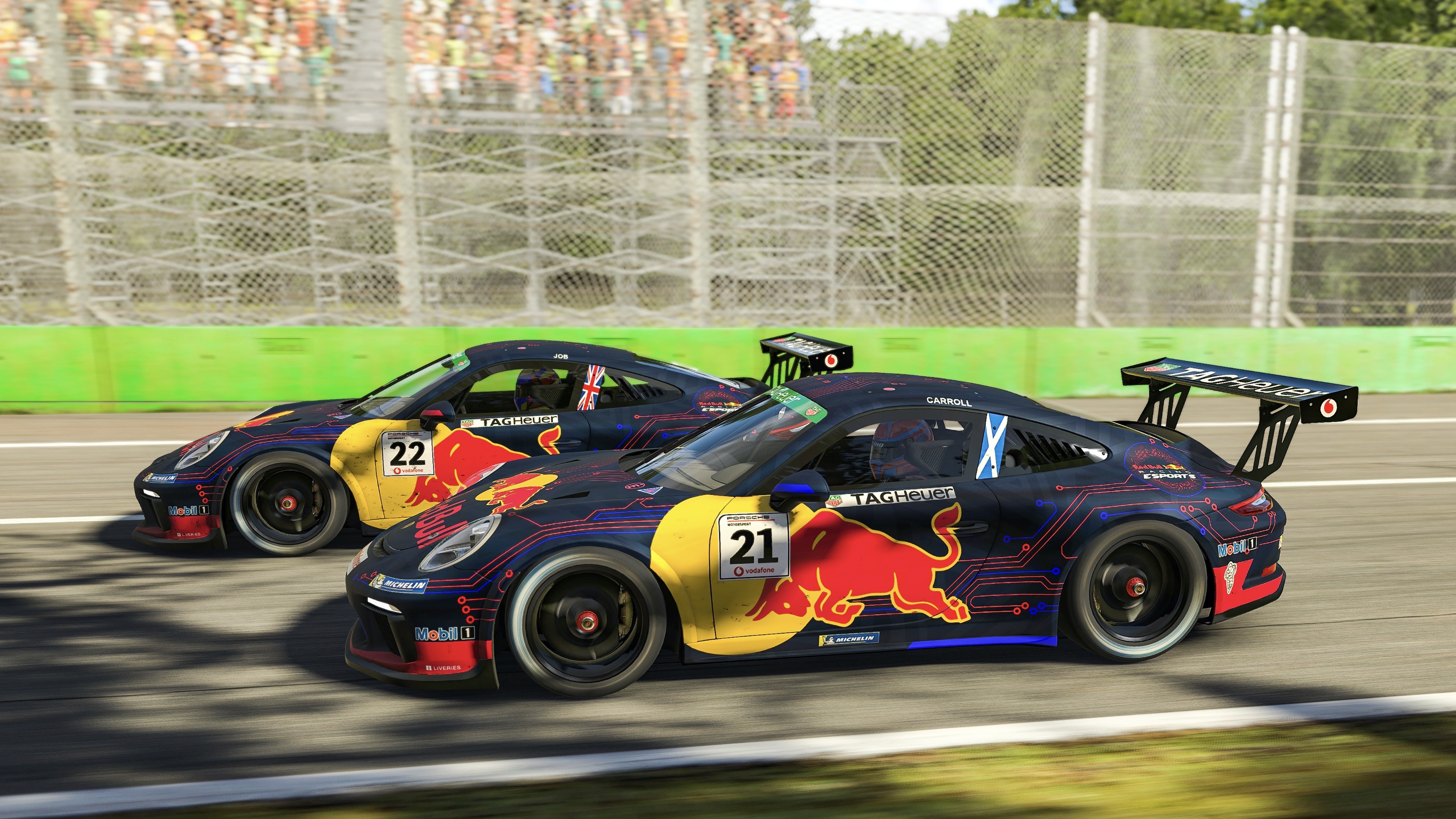 Since you are the champion now, can we expect you to be back for the next season?

Sebastian Job: Yes definitely. It is starting quite soon in January, but it ends in April as well, so that is nice. But I'm not going to lie, the thought crossed my mind to stop because I have other things I want to do in life. I thought of it like: "win a world championship and then I am free to go and do those other things". But at the same time I want to go and win more.

Where do you think the Porsche Tag Heuer Supercup goes from here?

Sebastian Job: Porsche Supercup has a great opportunity to grow it’s fanbase – we are some of the fastest, most skilled drivers in sim racing and we want to share our talents with as many fans as possible and hopefully bring new drivers onto the scene. More fans should, in turn, bring in more partners and help the production values increase. Maybe we can go to LAN events like the F1 Esports Pro Series.

Did you watch this year's Porsche Tag Heuer Esports Supercup? Tell us on Twitter at @OverTake_gg!
Tags: porsche, interview, iracing
By clicking on one of those buttons you are leaving OverTake.gg