Codemasters' new racing title DIRT 5 is coming with a lot of exciting features, but is the game as fun as it looks?
"Photo credit: OverTake"

With DIRT 5, one of the last big racing games for current gen hits the stores on November 6. As developer Codemasters has made clear that DIRT 5 is set up to be its new flagship, there is not too much that hasn't been announced, yet. In the end, it feels slightly different than expected in some ways, but be assured: you are going to have fun with this game as long as you know what to expect. Take a look at our review video to make up your mind.


A fun party on wheels, with boring DJ

DIRT 5 seemed to become a content monster of a game. 13 different event types, three different playground disciplines and lately 3 new multiplayer-party-modes. Basically an offering to make fans cheer. What looks massive at the beginning, triggers disillusion after recognizing that most of those disciplines feel quite similar. Names like Landrush, Ice Breaker or Ultracross are basically indicators of what track and cars are used. The feeling and the modes stay nearly the same.

Same song with the party-modes. Whether it is Vampire, King or Transporter: in the end it is all about driving away from your opponents or searching contact. This doesn't mean that it isn't fun, though. DIRT 5 is as fun as expected and delivers edgy arcade action with flawless controls, least with a controller. Wheel support is still flawed and feels a little stiff. Anyway, Codemasters has already announced that they will address this issue. Beyond that, the game keeps you motivated by allowing you to unlock endless vinyls and other gimmicks and create your own personal look. 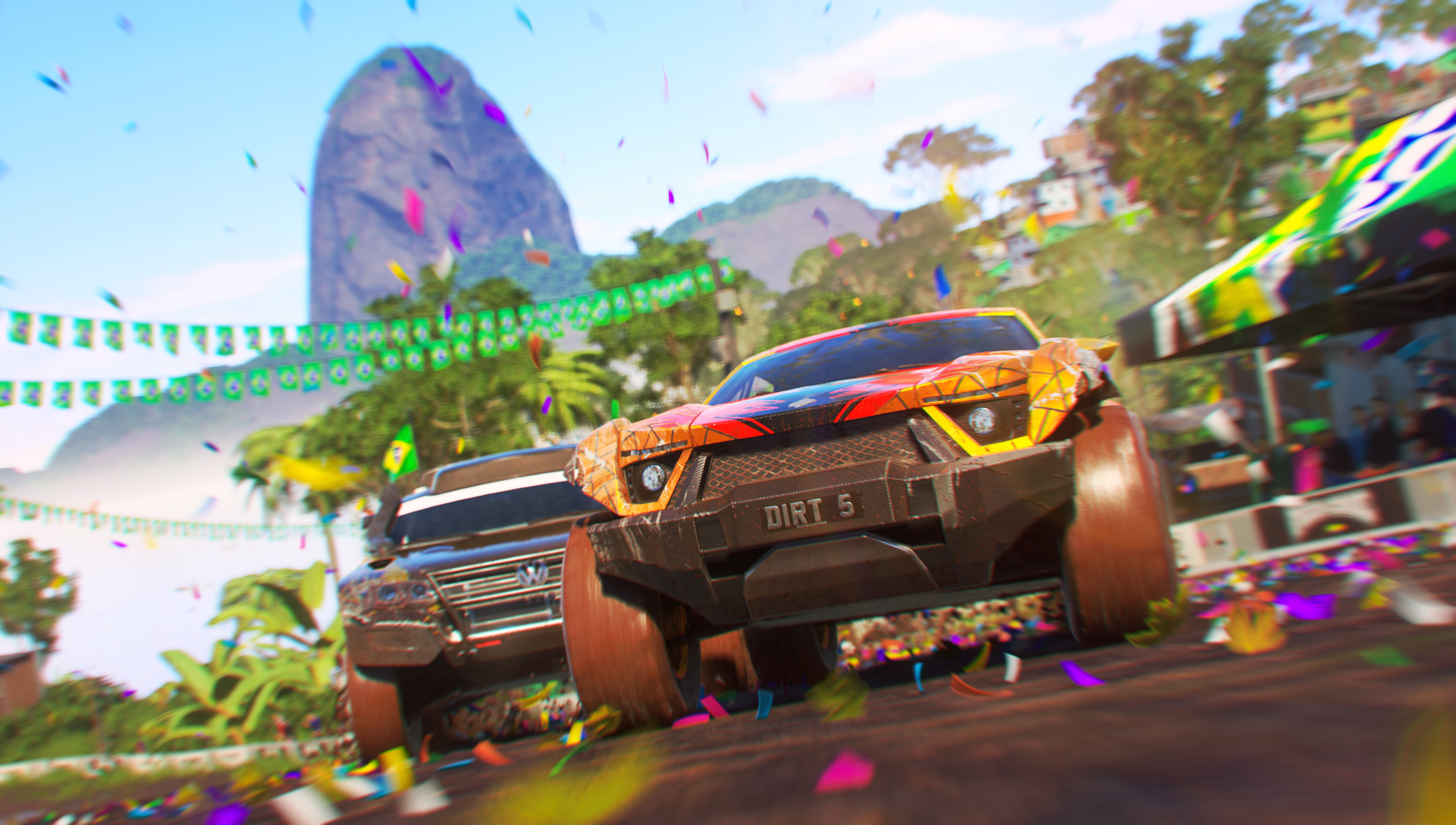 Every race in DIRT 5 is the same rush. Good thing it is pretty fun. Photo credit: Codemasters

The story which is presented through short podcast episodes before some events is not as epic as hoped. The voice actors Nolan North and Troy Baker do a decent job. But the basic content of their talking won't win any prizes. Nonetheless the short scenes feature charming humor and pull players into the world of DIRT 5. Every time you log in, Nolan's character AJ welcomes you with a new possible name for his mentoring program, which you (alone) are part of. This feels a little like coming home.

And it's a perfect home to invite friends into. DIRT 5 lets you play nearly every mode with up to three friends in splitscreen, even the career mode. The best result defines the progress. The game does everything to be a party on wheels. Starting with the massive multiplayer support and ending with the overdriven presentation.

Now seems the perfect time to confirm that the action looks almost just as impressive as in the trailers. The dynamic weather and everything that happens beyond the tracks are attractive eyecatchers. All these details run stable on 30 fps. If you prefer performance, you can switch to 60 fps. In this mode, the cars have much less anti-aliasing and details beyond the tracks like cheering characters are reduced in definition. The game still looks quite impressive though and 60 fps is permanent. 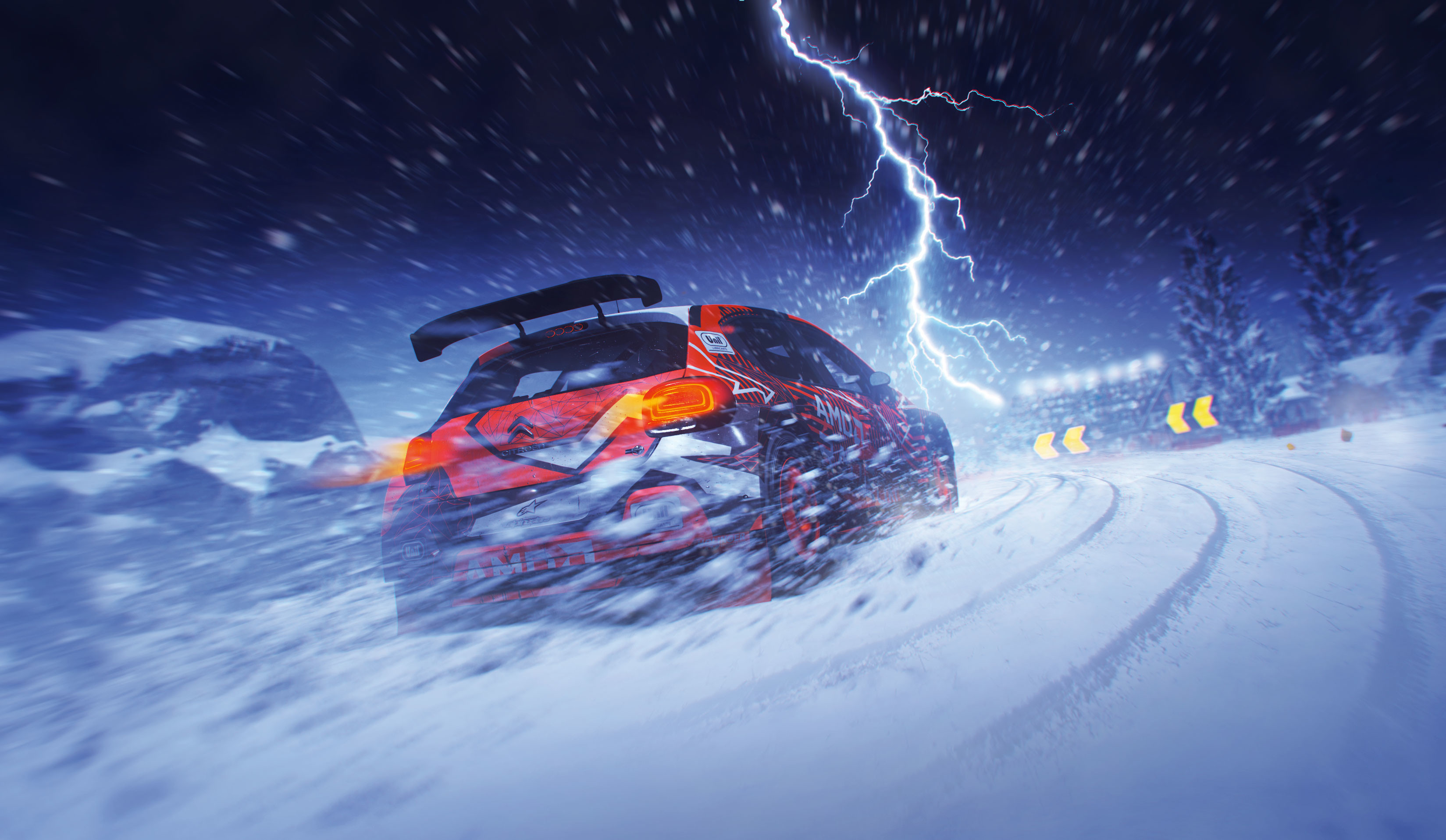 What also is quite impressive is that weather effects physically change the tracks. Puddles fill with water during rain, asphalt is covered in snow when a snowstorm appears and ice cracks and wears away. DIRT 5 is like a playable firework. Even though it hasn't grown in scale like some might have hoped, this game is still a party package that will surely help you celebrate the introduction of next gen consoles.

Will you play DIRT 5 and maybe even create your own Playgrounds? If so, share them with us on Twitter at @OverTake_gg.
Did you like this article? Please click thumb up or thumb down.
Tell us more
Tags: rallycross, release, review, preview
By clicking on one of those buttons you are leaving OverTake.gg