Game changers: The impact of Series X and PS5

Releases of the new Xbox and PlayStation consoles are just around the corner and the question which device is the best has been discussed for months now. However, the time of comparing should be over. Because the most interesting question today is how PlayStation 5 and Xbox Series X, individually and united, are going to change the video game market fundamentally.

Improved hardware has always been the key selling point for new consoles. The 2020 generation might be the biggest leap gaming has ever taken, driven by powerful new technology. PlayStation 5 and Series X rely on SSD instead of HDD storages. As a result, we get faster loading times which create a way more immersive flow in games. "It's the improvements to gaming immersion that really define the generation leap," said GamesRadar Global Editor-in-Chief Sam Loveridge in her PlayStation 5 review. A direct comparison between the hardware can be already found on YouTube, for example by games website GamingBolt:

However, it is not solely the hard drive boosting this improvement. The architecture of both the PS5 and Series X has been tailored to SSDs to create powerful gaming machines. Tim Sweeney, CEO of Epic, said "the storage architecture on the PS5 is far ahead of anything you can buy on anything on PC for any amount of money right now. It's going to help drive future PCs." PlayStation 5 and Xbox Series will set a new standard for games, especially in open world settings. Developers are going to exploit the new hardware strengths, being able to render bigger worlds in a never-seen detailed manner.

Are you ready for 4k gaming?

The powerful consoles are definitely ready to run games in 4k at 60fps. But are you, the player, also ready for 4k gaming? This question is quite a standard advertising catch phrase used by Microsoft and Sony, but it is actually worth looking into. Here you can see a direct comparison between 1080p and 4k.

In 2019, 53.5% of all TVs sold worldwide were 4k screens and only 0.2% featured 8k technology, which the PS5 is able to deliver as well. That means almost half the screens sold in the past year are not able to take advantage of the new consoles. In order for everyone to enjoy their games in the best quality possible, people need to upgrade their home gear. With their huge sales, consoles have always contributed to change in the games industry as well as the technology market. Maybe just minorly, but at least partly due to the new consoles, 4k resolution is going to become the new standard in people's living rooms.

One of the biggest customer questions coming into a new console generation is the price. Hardware is very costly, which is why most discussions focused on the initial selling point of the devices. However, a new possible big matter of expense has almost been overseen.

Prices for console games have been stable around $60 (€70) during the PS4 and Xbox One era. However, just a small paragraph in a PlayStationBlog entry suggests these days are over. Launch titles such as Destruction All-Stars or Demon’s Souls are listed with an initial price of $70 (€80). YouTube channels like Spawn Wave Plus have already discussed this issue. We have to assume these prices are not exclusive to launch titles but will become standard for AAA games in the new generation. Also, stakes are high this development is not PlayStation exclusive, but will become regular practice for Xbox Series X and PC launches as well. In general, games may become an even bigger investment in the upcoming generation.

Rise of the cloud

Digital purchases of games have become an increasingly important factor. The fact Microsoft and Sony launch devices without a Blu-Ray drive right from the start is proof of that. But it is not the lack of disks which is the most noteworthy change in the new decade. In the 2010s we have seen the rise of subscription-based online services. Movies, music, books, everything has become available for a small price. Paying $70 for a game seems to be more and more unappealing to the audience.

Gaming has seen similar models hitting the market. Microsoft and Sony already introduced premium services providing players with free games every month. Both companies are expected to expand the variety of their services in the new generation further.

And with the games market setting new revenue records every year, other big players are expected to join the party as well. Google Stadia, for example, promises its customers to stream games to their smartphones, tablets, TVs, or whatever web device they own. Norman Chan tested Stadia on Myth Buster Adam Savage's YouTube channel which is worth watching.

A Zion Market Research study expects Cloud Gaming to grow by 27.2%, reaching almost €7 million market revenue by 2026. Sony, Microsoft, and all other developers are thus going to make games more streamable, easier to access and create subscription models with even more (exclusive) games.

Why games are going to change

Speaking of games, let's finally dive deeper into the soul of every console generation. Several changes regarding games, their development, and the way they are being played have emerged in the late days of PlayStation 4 and Xbox One. They are set to be continued in the new decade.

We already mentioned how cloud gaming is going to become bigger within the next years. The new hardware cuts loading times drastically and makes switching between games much easier. Experts say the way games are played therefore could change drastically, almost to what we know from mobile gaming. Robert Karp, Development Director of DiRT 5, explained a similar thought in an interview with overtake.gg: "You open your phone, you flick, you can have a couple of quick games in a few minutes and move on. I think next gen offers you that deep immersion you get from AAA console games, but you can also do it in a bite sized format because you can get in super-fast." Find the full interview linked below:

While the change in gameplay culture is speculation, another trend that has been upsetting people for years is going to become even more influential: platform-exclusive games. In September 2020, news broke Microsoft acquired Bethesda, the game company behind many popular titles such as Doom, Fallout, Skyrim, and Wolfenstein.

Exclusive games have always been a key selling argument for any console. And Microsoft's September deal was not only a major coup, but also a challenge. The high buy-out price of $7.5 billion shows how much it is worth to the console companies to own well-known studios in order to get their titles first or even exclusively on their platform. Sony and Microsoft are going to extend their portfolios, and if the trend goes on, more AAA titles will find their way to only one of the two popular entertainment systems.

But we do not want to end our outlook on such a negative note. Gamers look forward to a great era of new games. And while most launch titles may not be AAA or exploit the full potential of the hardware yet, those games are going to hit the market very soon. 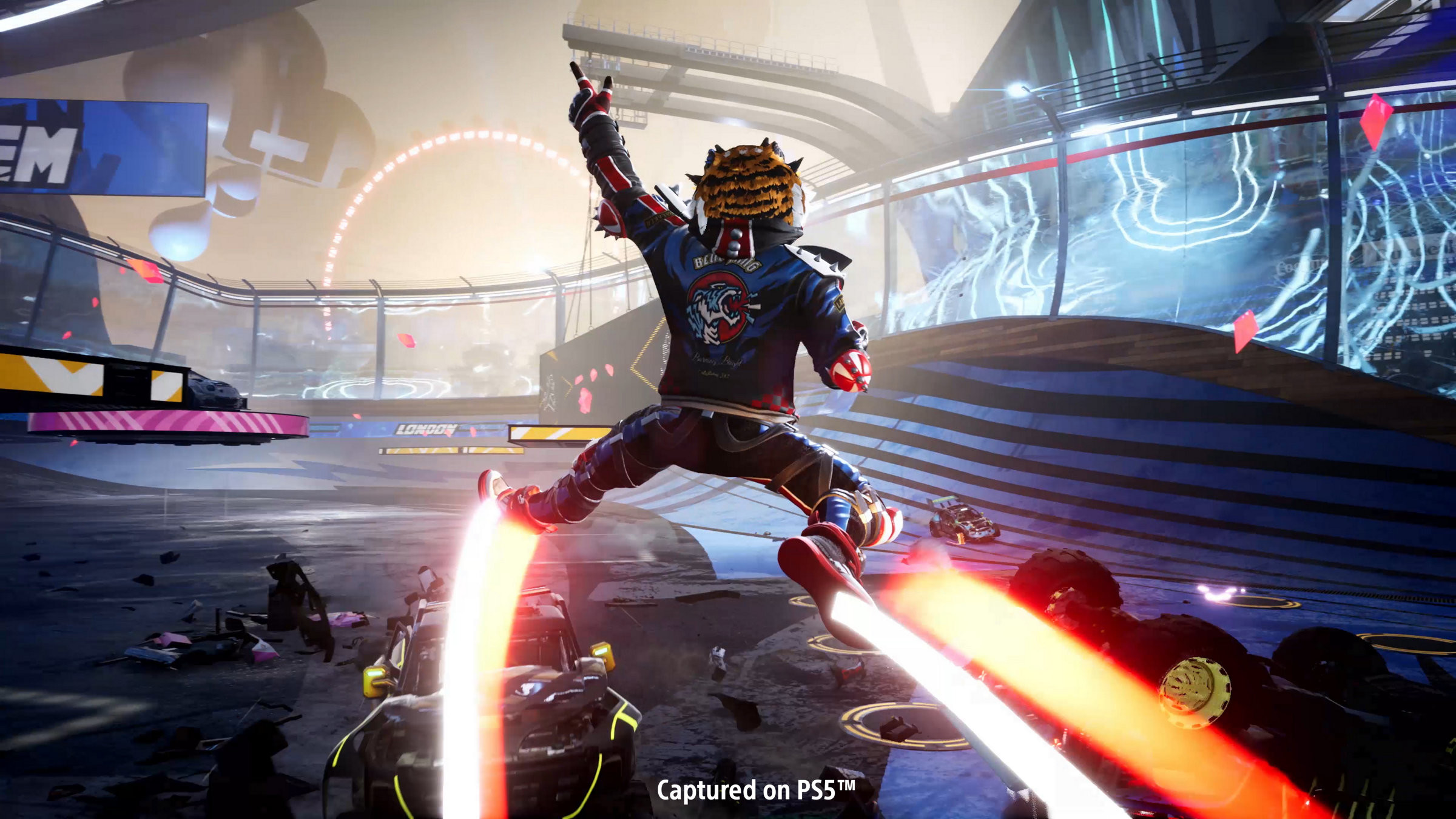 The new PS5 exclusive Destruction All-Stars is set to be released in February 2021. Photo credit: PlayStation

Several experts predict 2021 to be one of the best years in terms of game releases. A survey by the Game Developers Conference showed the COVID-19 pandemic forced one third of developers to delay their games. Popular examples of games delayed from late 2020 are Halo Infinite, Outriders and Far Cry 6. All those belated games are going come to the next generation, possibly even better than they would have been since developers had more time to adjust them to the new hardware.

Both PlayStation 5 and Xbox Series X are going to change the gaming market fundamentally. While the impact might not be seen in 2020 yet, the next year is likely to become one of the biggest leaps in gaming history.

Which impact is the new console generation going to have? Tell us on Twitter at @overtake_gg!
Did you like this article? Please click thumb up or thumb down.
Tell us more
Tags: meta, playstation, xbox
By clicking on one of those buttons you are leaving OverTake.gg