The OverTake Clash of Racers II live-event on Twitch is right around the corner. We are proud to announce our new partner: luxury watch manufacturer TAG Heuer is going to support the special showdown!

The brand is a household name in motorsports and is globally known for their high-quality avant-garde watches. TAG Heuer will stop time for you and even rewind it in Clash of Racers II: they will present the replay segment and highlight the crowning ceremony.

Get creative and win a TAG Heuer Connected Watch

TAG Heuer is also providing a stunning prize for the Clash of Racers fans. The two winners of our special livery contest will both win a TAG Heuer Connected watch each. This masterpiece worth €1,700 can support esports racers in their training, as they can monitor their sports performance with the watch and get valuable data. You can find more information on the livery contest and how to participate below.

The TAG Heuer Connected Watch was designed with the iconic lines and the elegance of TAG Heuer chronographs. It helps for example athletes to keep track of their speed, pace, heart rate and distance while exercising. The watch has a touchscreen display of 45mm, a steel case and is water resistant. The battery lasts for a full day including a one-hour sport session and fully recharges in just one and a half hours. 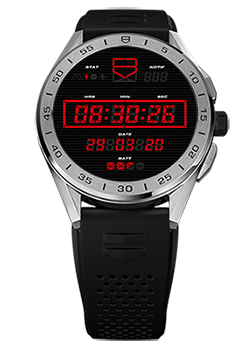 The ultimate reference in luxury chronograph watches, TAG Heuers high-precision timing innovations have kept pace with the evolution of sports since 1860. Their timepieces make it possible to capture every fraction of a second of a performance. From the wrists of drivers who have marked the history of motor racing, the top-notch technology and elegant design finds its way to become your favorite time keeping equipment. The brand currently offers several product lines, such as Formula One, Aquaracer, Carrera and Connected for you to choose from.

Racing fans are well aware of the prestigious manufacturer, as TAG Heuer has a long history of supporting the motorsports scene. Racing is all about bringing the fastest performance, and therefore it is crucial to capture every fraction of a second. TAG Heuer became the first official timekeeper for the Formula 1 World Championship. After several decades of promotion and sponsorships in real motorsports, the luxury chronograph watch manufacturer also started to support the virtual world of racing with the 2020 Porsche TAG Heuer Esports Supercup.

What is Clash of Racers II?

Clash of Racers II is the second instalment of OverTake's live-show on our Twitch channel. We want to celebrate the variety of racing games in a fun special event. On December 13, two teams will race against each other in several titles. Team RED and Team GREEN will be represented by some of the most popular personalities in esports racing, with one captain and four racers per team. Our heroes will compete in fun and challenging racing games to fight for the special Clash of Racers trophy.

Fans have the chance to be part of the event as well. As the drivers of Team RED and Team GREEN need an appropriate style when trying to beat their opponents, the community is invited to design the liveries in a unique contest. There will be two winners, and each of them receives a brand-new AOC C32G2AE/BK gaming monitor, as well as a TAG Heuer Connected watch. You can find more information in the two articles below.

Are you excited about Clash of Racers II? Follow us on Twitter at @overtake_gg for all the latest news and updates!
Did you like this article? Please click thumb up or thumb down.
Tell us more
Tags: clash of racers, event, esports, gaming, announcement
By clicking on one of those buttons you are leaving OverTake.gg