F1 Esports: How does it work?

If you want to watch F1 Esports but don't know all the details or where to start, this is the guide for you.
Photo credit: Joe Brady

F1 Esports is attracting new fans all the time, even some who don’t watch the real-world equivalent. For new viewers, the way in which the tournament is run can sometimes be a little bit confusing, and some basic information isn’t all that easy to find. Before the final rounds commence on December 16, we made a walkthrough of the tournament structure and format for the F1 Esports Pro Series 2020.

The Teams and Drivers

The F1 Esports driver lineup is made up of only the most elite racers in F1 2020. Some have been a part of the Pro Series since its inception in 2018, while others have qualified for subsequent seasons' Pro Drafts via such avenues as the Challenger Series. This is a six race series which takes place on PC, Xbox and PS4, from which the top seven drivers on each platform are selected to enter the 2020 Pro Draft. Drivers qualify for the Challenger Series by completing in-game events and with high public leaderboard rankings.

So how exactly are the drivers selected, and how do they end up on their respective teams? Most drivers made their way into the F1 Esports Pro Series via the Pro Draft, which we covered above. However, drivers who are already competing in the series do not need to re-enter the Pro Draft if they can find a contract with a team for the upcoming season. For their part, each team must select at least one driver to join their roster from each year’s draft.

To help facilitate the nurturing of talent within F1 Esports, every constructor has a line-up of three drivers, even though only two drivers per team participate in each race. The third driver will train with the team, and some will rotate their drivers in and out on a race-by-race basis.

The 2020 F1 Esports Pro Draft is just around the corner!

Once our racers are selected on Thursday August 27, this is when and where they'll be racing in the Pro Series 🗓#F1Esports 🎮 #F1 pic.twitter.com/6jRqhJeMDZ

Four events, each consisting of three races, makes up the F1 Esports 2020 calendar. This is the same basic form that the 2019 season of the F1 Esports Pro Series took as well. However, while in 2019 each event only ran over the course of one day, the 2020 series uses two-day events.

The way these two-day events work is that the first day of the event features two qualifying sessions and races, with the first of the two races having been pre-recorded. On the second day, the third and final race of the event takes place.

Each race of the season uses a different circuit from the Formula 1 calendar. In all, twelve races make up a full season, with each one taking place at a different venue. Twenty drivers compete in each round of the season, and teams are able to substitute drivers in and out between races. 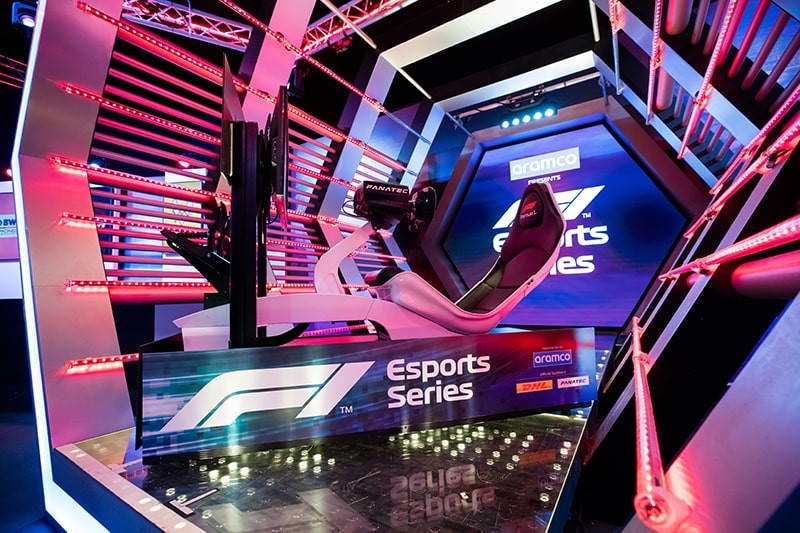 The events are broadcast from the Gfinity Arena in London, but in 2020 the drivers are racing remotely. Photo credit: Joe Brady

As has already been mentioned, each event consists of three races. Each of these races is proceeded by a qualifying session, in which the competitors have to set individual laps in three successive timed sessions.

Then it is time for the race itself. The drivers line up on the grid as determined by the aforementioned qualifying sessions. They then have to race over thirty-five percent of the distance of a real-world F1 race at the circuit in question. Over the course of this race, each driver must use at least two different compounds of tire, unless the race is affected by rain in which case this rule does not apply.

Points are accumulated in F1 Esports in exactly the same way that they are in real-world Formula 1. That is to say, there are a certain number of points available per race for the drivers, which are allotted depending on their finishing positions.

The first placed finisher receives twenty-five points, with eighteen for second and fifteen for third. The final points scorer is the tenth placed finisher, who receives a solitary point for their efforts. There is also a single bonus point available for the driver who records the fastest lap of the race, however only drivers who end up in the top ten are eligible for this.

Who were you really impressed with tonight?

At the time of writing, the 2020 Pro Series driver’s championship is led by Alfa Romeo Racing Orlen Esports driver Jarno Opmeer. Despite this, the team with the most points is Red Bull Racing Esports Team, whose drivers Marcel Kiefer and Frede Rasmussen are sitting third and second in the driver’s standings respectively.

The last event takes place on December 16 and 17 and we will finally see, if any of these three or a surprising underdog is going to become the 2020 F1 Esports World Champion. You can watch the match live in our match ticker.

What else would you like to know about F1 Esports? Tell us on Twitter at @overtake_gg!
Did you like this article? Please click thumb up or thumb down.
Tell us more
Tags: f1 2020, esports
By clicking on one of those buttons you are leaving OverTake.gg