2020 has been a difficult year but we still have a couple of cool things to look back to such as the launch of OverTake! We want to say a big thanks to every single one of you.
Let’s be real, when we started working on OverTake at the beginning of 2020, nobody expected the year to go the way it did – in many different ways. We wrote concepts for content formats that would have taken us around the world, built studios to host some amazing guests. And then a global pandemic hit but we weren’t OverTake if that would have stopped us. Instead, we overhauled our concepts and found new ways to bring you the world of esports racing into your living rooms.

We would like to invite you to a time travel in which we look at OverTake's milestones and give a glimpse behind the scenes. This was in many aspects a challenging, yet remarkable year and we are thrilled to share our experiences with you. Enjoy!


While our web team was busy finishing up our amazing platform back in March, our content team seized the opportunity and launched our first video format: Nitro Nights Online, a fusion of newsflash and entertainment show just for esports racing fans, to which we invite interesting guests. We initially wanted to start out with the studio version you now know simply by "Nitro Nights" but due to the uncertainty sourrounding the coronavirus and the strict lockdown, we decided to go for an online-only version.

Hosted from Tom Deacon’s lovely living room three times a week, our witty comedian welcomed some of the most famous guests from sim and real-world racing. DTM driver Dani Juncadella had the honor to be the first guest on our show with Ferrari’s F1 Esports driver Enzo Bonito being the last before we moved production to our Berlin studios in May.


After 16 episodes in over five weeks, the corona situation eased a bit and we moved production to our studios. Plus we introduced two new hosts to our show: Indiana 'Froskurinn' Black as well as Melek 'm3lly' Balgün! Unfortunately, we still haven’t been able to welcome many guests to our holy halls – so far only Danny Giusa joined one of our Nitro Nights episodes in person. But we do hope to change that in 2021 with the global pandemic hopefully easing up. Overall, we got in 30 episodes in our studio this year with Tom finally coming over from the UK and Steffi Langer joining us as well.


Well, to be fair: Our website was actually live a couple of weeks before that. We just haven’t really promoted it before as we wanted to test things beforehand and just get them perfectly right. But on June 8, we were finally able to tell the world about our baby. We started out with a handful of pieces, but since then not only did our community grow with every single day but so did we. We can now look back at over 700 published articles – from amazing feature pieces on Jimmy Broadbent to listicles about cars in Cyberpunk 2077.

Additionally, we have also published over 145 YouTube videos, including entertainment formats, tutorials, game and hardware reviews, and of course Nitro Nights. This wouldn't have been possible without the help from our friends such as Dave Gaming and James Baldwin. What a lot of you might not know, is our coverage system! You want to know everything about the F1 Esports Pro Series 2020? We've got your back! Three of our toughest editors are updating our coverage system every day in order to make sure you get all of your esports racing information as soon as they happen.


June was absolutely packed for our team. We didn’t wanna launch the project we’ve put so many hours into without a proper party – and this is how Clash of Racers was born. The entertainment show was streamed live on Twitch on June 21 and featured some of the best-known influencers and pros of the sim racing scene. Over 650 hours of preparation went into this event – late into the night but that’s how events work sometimes!


It’s not like we’ve been sleeping during the time from June until November. It’s rather the other way around: We launched our podcast Nitro Nights Stories and started working on some other new content formats. We also decided to focus more on optimizing our on-going content first, before we pulled off our next big thing. But let’s be honest: We wouldn’t be here if it wasn’t for every single one of you reading our articles, engaging with your content and interacting with us on social media. This is why we decided to honor our community by creating the Hero of the Month award. This way we want to celebrate the amazing people in the esports racing scene. The first one has been given to the absolutely badass Emily Jones, who won the Porsche Esports Supercup All-Stars Race and is just overall a great rolemodel.


As mentioned above, our community is our heart and soul. This is why we decided to include them more into our content and create a new Twitch format: Stream Team. Since November 25, we have four amazing content creators from all over the world providing you with weekly streams in GT Sport, F1 2020 and more. You can find further information on who is streaming when here.

December 13 – Clash of Racers II rounds up the year


After the success of Clash of Racers I we decided to do another iteration of the entertainment show shortly before christmas – but this time even bigger. We invited League of Legends icon Eefje 'sjokz' Depoortere and coach Jakob 'YamatoCannon' Mebdi as team captains to our studios to battle it out!

All in all, we can look back at a very busy, very successful year we couldn’t be more proud of. We’ve worked day and night in order to bring you the best esports racing content and we really couldn’t have done it without our amazing community. Thanks a lot and we can’t wait to continue to take over the esports racing world next year. 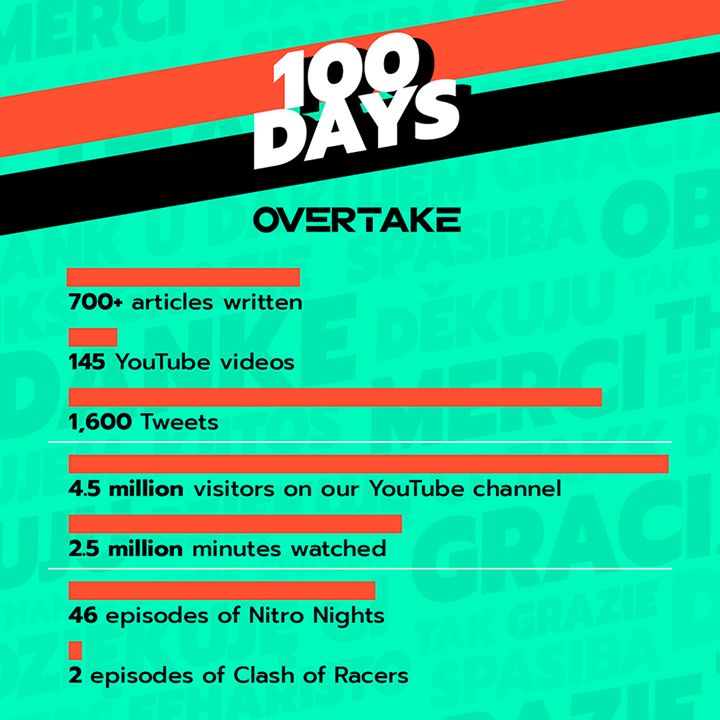 We are quite proud of these numbers!

OverTake published more than 700 articles and almost 150 videos (with almost 4.5 million people visiting our YouTube channel, wow!) in its launch year. 46 episodes of Nitro Nights and two Clashes of Racers came on top to round things off!
Did you like this article? Please click thumb up or thumb down.
Tell us more
Tags: fluff, christmas, clash of racers
By clicking on one of those buttons you are leaving OverTake.gg