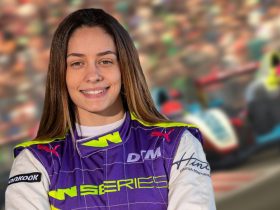 Marta Garcia on the rise in W Series Esports

ADAC GT Masters, World of Outlaws and the fight in the W Series make it to our weekly preview.

The ADAC GT Masters is already in full swing and this weekend marks the start of this year’s virtual edition of the series: ADAC GT Masters eSports 2020. The esports racing event will begin this Saturday with a season opener at the Eurospeedway Lausitzring.

The series is notorious for bringing viewers a fast-paced racing experience every event. The real-life iteration is among the most popular GT series in the world and its esports counterpart is looking to replicate that success. With a massive prize pool of €80,000 in cash and non-cash prizes, the series is amongst the most profitable outside of iRacing which features events like the 2020 eNASCAR Coca-Cola iRacing Series.

RaceRoom is the platform of choice for ADAC, which makes sense since the developers have acquired the license to use the cars of the ADAC GT Masters in 2015. Besides that RaceRoom also features other German racing series like the DTM, which makes them the perfect fit to host the GT Masters eSports.

If you want to follow the action, then have a look at the ADAC YouTube channel to be right there when the racing starts on Saturday 1 of August at 6.30 PM CEST.

A small bit of dirt until greatness

2020 World of Outlaws Morton Buildings Late Model Championship Series is going into its seventh round and things could not be more exciting. The six previous races have produced winners. This leaves the top of the table in steady fear of being overthrown. At the moment, Round 3 winner Dylan Wilson claims first place with a minuscule lead of 11 points. Trailing closely behind Wilson is the only two-time race-winner Hayden Cardwell with 398 points and last round’s victor Evan Seay with 395 points.

With the point structure of the World of Outlaws Morton Buildings Late Model Series, it is safe to say that any misstep can lead to a drastic change in the standings. The featured race gives as many as 70 points so failing can mean anyone’s quick downfall. Dylan Houser has found himself in that position as he missed the featured race last round and promptly dropped four places, from third to seventh.

Round 8 will bring us to the Illinois Fairbury American Legion Speedway, which has been voted dirt track of the year three times in the last decade. So, the next round is going to guarantee nail biting action on one of the most popular dirt tracks out there.

If you want to flirt with the dirt you can tune in to the iRacing YouTube channel on Monday August 3.

A new challenge to the Queen

The W Series Esports League 2020 is racing towards its final stage. So far, Beitske Visser has been consistently outclassing her competition and only really battled head to head with Russian rookie Irina Sidorkova. However, those days have long gone, because Sidorkova was struck with a streak of bad performances that leave her trailing behind by almost 100 points now – a seemingly impossible task to challenge Visser.

But over the past couple of rounds a new face has emerged from the midfield to take the battle to Visser. Marta Garcia has found her rhythm and quickly became the dark horse of the W Series. Now she is a legitimate contender to Beitske Vissers formerly uncontested throne.

Last outing saw all three top contenders take victories in the three races at Bathurst. While the gap in the standings largely remained the same, it does leave room for hope of an exciting end to the season. Anyone can take points off anybody else.

This following round will see the W Series race at the Nordschleife. The very narrow track punishes any mistake and will be surely hard to race with the Formula Renault replicas of the W Series. It could mean absolute chaos and a war of attrition.

We will see if the queen will be thrown off Thursday, August 6, on the iRacing YouTube channel.