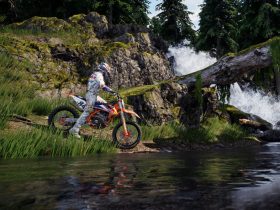 New Motocross Game to Jump Onto Shelves in November

Last race of the regular eNASCAR season, close battles in V10 R-League, and MotoGP comeback are topics of our weekly preview.

The final at Superspeedway Talladega is the last race of the regular season for eNASCAR! Racers are locked and loaded as they head to the track in the middle of Alabama. Rubber and fuel will fill the air as the last points are up for grabs. Everything is on the line for some of the drivers, especially those in Playoff contention. Here are the current standings (plus a quick reminder that the top 8 make the Playoffs):

The top six places have locked in their playoff spots already and are almost safe from dropping out. The gap from Williams’Ryan Michael Luza to ninth place Jimmy Mullis is at 32 points, which means that unless Luza drops out, or finishes 34th like this week, he should secure himself a spot in the playoffs.

This isn’t impossible, though. This week, ninth place Mullis pulled off a fantastic win at Las Vegas. His outstanding drive catapulted him into direct contention for the playoff places. He seems to be a threat to anyone, especially his direct rivals Ray Alfalla and Logan Clampitt, who sit in 7th and 8th place.

With just one race left to make it into the playoffs, relive the penultimate round of the regular season for the eNASCAR @CocaCola iRacing Series from @LVMotorSpeedway . pic.twitter.com/KsEtZuax1l

The venue for this race also couldn’t be more fitting. Talledega has produced some high-octane racing in the past, and with playoff spots at stake, the probability of an amazing race is high.

“Talladega is very wide, so it presents many passing opportunities,” said Ray Alfalla when asked about the track. Alfalla currently sits in 8th place, which would be enough for him to punch his playoff ticket.

Alfalla told us about his expectations for the regular-season finale as well. “I expect nothing short of chaos!”

This is a Public Service Announcement: You don’t want to miss this event. It is going to be nothing short of great racing. If you ever needed to watch an esports racing event, it is this one. Tune in to watch the action at iRacing’s YouTube channel on Tuesday, September 29 at 3am CET.

Williams and Porsche fight for the top spot

Round 4 of the V10 R-League brings us to the Italian circuit of Vallelunga. So far, the series has proven to be filled with action. The dueling format of the V10 R-League is a breath of fresh air, as the teams always go for overtakes, no matter what.

The previous round at the Nürburgring had many spectacular moments. But certainly, the most entertaining was a crash in the BMW vs Racing point match.

However, one point of contention is the absence of physical damage on the virtual cars. This led to numerous crashes last time at the Nordschleife, as you can see here:

This coming round could present a deciding point in the championship fight between Williams and Porsche. Both teams have driven immaculately so far. They were scoring well in every one of their matchups. With only one point separating the leading Porsche from its hunter, the pressure is on.

While Porsche faces the struggling Jaesa Team Suzuki, Williams is looking to end the BMW’s two-race win streak. If they both win their respective rounds, we could be in for an exciting fight at the top.

If you want to witness the madness, you have to tune in to BT sports 2 or visit Bt.com on Monday, September 28 at 7PM CET.

Back on two wheels

After a break of more than three months, the MotoGP Global Series returns next Friday, October 2, with Round 2.
After such a long break, it is hard to predict the racers’ form, but one thing is for sure: the series will not be boring. Last time around, the racer Williams_Adrian was superior, driving almost flawlessly to claim back-to-back victories at Round 1. We will see how it turns out this time.

The circuits for both races of Round 2 are Spielberg and Sepang. Both known for high speeds and a ton of overtaking spots. he Austrian track of Spielberg will require a particularly steady hand from the racers, as they try to handle the often-unpredictable course.

MotoGP will stream the event on their YouTube channel on Friday October 2 at 6PM CET. So tune in and get ready to pull a wheelie with your office chair.