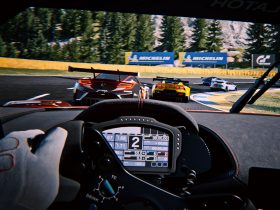 All you need to know about the GT Sport World Finals, including where, how and who to watch!

Gran Turismo has announced the date and schedule for its third annual World Finals event, the culmination of a year of fierce competition on GT Sport in the form of both the Manufacturer Series and the Nations Cup. The two finals will take place on December 19 and 20 respectively, with the broadcast for each beginning at 2 PM CET.

The finale of the Nations Cup will draw in a wide audience of fans. The regional qualifier events for the final took place during November and December, and each of these was watched by tens of thousands of viewers. The finals will consist of three back-to-back races, with the final of these being worth double points.

In all, sixteen drivers have made it to the final where they will battle it out to become the World Champion. Of these, eight qualified from the Europe, Middle East and Africa region (EMEA), while four from both of the Americas and the Asia-Oceania regions will be joining them to round out the field.

Who will be crowned World Champion? #GTSport #FIAGTC

2019’s edition of the Nations Cup World Finals saw Mikail Hizal come out on top. He will not be returning to defend his crown this year, and as such the competition has been blown wide open. Second and third place finishers from 2019 Cody Nikola Latkovski of Australia and the Frenchman Baptiste Beauvois will fancy their chances, though neither of them was able to claim the overall victory in the regional qualifiers.

Each driver will go into the World Finals with a certain amount of points already to their name, based on their performance in the regional finals. Takuma Miyazono of Japan, the Asia-Oceania regional champion, leads the way in this regard, with eleven points already in the bag. The other two regional champions, the Spaniard Coque López and Brazil’s Adriano Carazza, are hot on Miyazono’s heels with eight points each.

2019 runner up Latkovski will start from a base of seven points, with Beauvois on six. Another driver to watch will be Valerio Gallo. The Italian claimed victory in two of the three races in the EMEA regional qualifier, but an off-color performance in the double points race saw him drop down the final order. If he can relocate the form he showed in his two regional qualifier victories, then he may be able to jump up the standings from his starting position of eleventh with five points.

While the Nations Cup will be the main draw for many, the Manufacturer Series finals will be worth a watch as well. Twelve different car manufacturers will each have three representatives for the finals. These teams include all kinds of different brands, from Citroen and Volkswagen to Porsche and Lamborghini.

Each team of three drivers will contain one driver from each of the three regions. Like the Nations Cup, the Manufacturer Series consists of three races, with the third and final race being worth double the points. The teams will enter only one of their line-up for each race, so every round will see a totally different field of drivers.

Hizal, the 2019 Nations Cup champion, will be making an appearance as a representative of the Subaru team. Many of the current Nations Cup field will also be participating for various brands, and the quality of competition looks to be just as high. On top of these World Finals events, the finals of the GR Supra GT Cup will be broadcast on December 18, to get everyone in the mood for some GT Sport action.

I am extremly happy to announce that I will be representing for Subaru in the 2020 Manufacturers Series teaming up with amazing teammate’s such as @Kerokkuma_ej20 and @Amphydoodlebutt!
Let’s give it our best there and best of success to all of the competitors! #ProudOfBoxer https://t.co/TdUAPy3MEU pic.twitter.com/MhGL92CzhL

If you want to catch the World Finals yourself, head on over to the Gran Turismo TV YouTube channel, where the Manufacturer Series will premiere at 2 PM CET on December 19, followed by the Nations Cup on the next day at the same time.

Who do you think will come out on top? Tell us on Twitter at @overtake_gg!