OverTake > Esports > Previews > Baldwin v Tonizza: Who will be champion?
0 Shares
READ NEXT 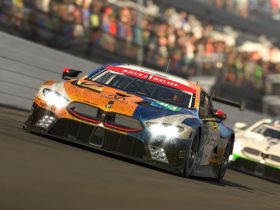 The final Sprint round of the SRO GT World Challenge Europe Esports Championship is taking place with two drivers level-pegging for the championship. This is a battle for the ages!

SRO Motorsport Group’s Esports championships in America, Asia and Europe got underway back in May of 2021, and in Europe in particular, the field was pretty much made up of the ‘greatest hits’ of all esports racing drivers. The level of talent in this field was arguably the highest in all of esports racing.

🎮 Baldwin wins it and takes a two-point championship lead into the finale!

However, heading into the last round at Spa-Francorchamps on 12 November, there are two drivers in particular who are making the headlines. They are 2019 F1 Esports champion David Tonizza of FDA Esports Team and World’s Fastest Gamer winner James Baldwin of McLaren Shadow. These two legendary F1 teams’ esports divisions are now going into battle for virtual glory with two of the biggest names in all of esports racing.

A season of two halves

In the first part of the season, Tonizza stamped his authority. The 2019 F1 Esports champion won three out of the first four races and in the one he didn’t win, he was second to Rogers. The Australian initially seemed to be the one taking the challenge to Tonizza. However alongside the Sprint series, plenty of the drivers were also competing in the Endurance series, dividing their attention.

The season’s structure saw many of the Sprint rounds take place the day before the Endurance races, and with Rogers’ stacked schedule in other series on other sims, his team Coanda Simsport began to prioritise the Endurance races. Tonizza however remained in both the Sprint and Endurance series alongside his F1 Esports campaign, though his split focus would begin to turn the tides in favour of another.

As Tonizza began having to balance his preperations for the upcoming F1 Esports season with SRO, former McLaren F1 Esports racer Baldwin saw the momentum swing towards him. After only managing a best result of two fourth places in those opening four rounds, he won the next two races whilst Tonizza struggled, the Italian crucially failing to score at all in a couple of rounds. Baldwin’s sole focus as of late has been racing a McLaren 720S GT3 on ACC, doing the Sprint series for McLaren Shadow, Endurance rounds with Rocket Simsport and even TheSimGrid World Cup with YAS HEAT.

🎮 After four rounds he was 53 points off the championship lead. But @JaaamesBaldwin heads into the finale with a two-point advantage.

After Naujoks took two wins in the rounds preceeding Barcelona, it would be this race that would see the two going head to head. Baldwin and Tonizza started from the front row and they spent the entire race mere metres from each other, and in the end it was Baldwin who came out on top over Tonizza and taking his third win of the season. This result saw the McLaren driver go to the top of the standings by just two points over his rival, after having been 53 points away after round four.

Baldwin has had a stellar year on both Assetto Corsa platforms. On the original game, he won his team Veloce’s SquadSprint series in 2022 F1-esque cars. In that competition, he outperformed major esports racing drivers including the likes of Jarno Opmeer, Bono Huis, and previous two-time SquadSprint champion Daniel Bereznay.

He also came within a whisker of helping McLaren Shadow win season two of the V10 R-League, just coming up short at the end thanks to a rare error. Despite that, Baldwin was still considered by many to be the driver of the season. Then, on the Assetto Corsa Competizione platform, he won the British GT Esports championship in dominant fashion. With such momentum on his side heading into the Spa-Francorchamps finale, perhaps he’s the gambler’s choice for the championship.

However do not discount Tonizza. His pace undoubtedly was hampered by not getting enough time to practice whilst juggling his duties with F1 but with the next F1 Esports event being at the end of this month, he has likely been able to fully prioritise the preperations for SRO Sprint championship finale.

Tonizza has already tasted championship glory in SRO; along with his teammate De Salvo and also with some help from his current and former F1 Esports teammates Brendon Leigh and Amos Laurito, he has claimed the Endurance series title. He will no doubt be really eager to add the Sprint title to his list of accolades and get the double for the SRO Esports championships.

last race is gonna be 🔥

This could very well be as simple as a coin flip. Baldwin holds a two point lead, so if he fails to finish and Tonizza only finishes tenth, Baldwin is champion. However, if Tonizza is ninth they will be tied on points, with Tonizza winning on countback. They both have three wins but since Tonizza has two second place finishes whereas Baldwin only has one, the title would go the way of the Ferrari driver. Otherwise it is as simple as this: whoever finishes ahead will be the champion.

You do not want to miss the finale! The broadcast begins 9pm CEST on the SROMotorsports Twitch and the GTWorld YouTube channels.

Who will win, James Baldwin or David Tonizza? Tell us on Twitter at @OverTake_gg or in the comments down below!