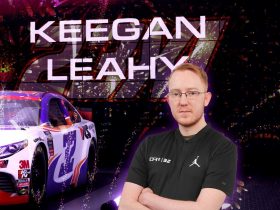 Leahy could be overtaken in the eNASCAR Coca-Cola Series, while Cardwell looks to keep his streak going in World of Outlaws.

The 2020 eNASCAR Coca-Cola iRacing Series moves on to its eleventh round on Wednesday, 29 June, where the drivers will be racing on the Michigan International Speedway. If the current standings are anything to go by, it’ll be an interesting race for current leader Keehan Leary who’ll be looking to maintain his leadership position after a rough week at the New Hampshire Motor Speedway, where he wasn’t able to make his mark.

After last week’s result, Leahy’s closest competitors Ryan Michael Luza and Garrett Lowe managed to inch closer and are starting to close the gap. However, Leahy still has some leeway after winning the ninth round over at the Indianapolis Motor Speedway. You’ll also have to keep a close eye on industry legend Ray Alfalla, who – after a disappointing start to the season – has posted strong results in his past three races, winning round eight and driving to third place in round nine.

We might be looking at a very interesting race over at the Michigan International Speedway when we take its history in consideration. In 2019, Garrett Lowe was victorious on the track, with Ryan Michael Luza winning back in 2018. Leahy might face some stiff competition in a series that is far from over. You can watch round eleven of the eNASCAR iRacing Series over on the iRacing YouTube channel on Wednesday, 29 June.

The top three drivers in the World of Outlaws Morton Buildings Late Model Championship Series are exceptionally close as the competition moves on to its sixth round on the Kokomo Speedway. Hayden Cardwell remains the favorite, but Dylan Wilson and Evan Seay are only eight and nine points away respectively. The gap between third and fourth place, the latter being held by 20-year old talent Dylan Houser, is remarkably wide with a 30 point difference.

Despite Dylan Wilson and Evan Seay performing well, Cardwell managed to win round five at the Lernerville Speedway after rather mediocre performances in round three and four, finishing in sixth and seventh place respectively. There’s no doubt he’ll be looking to keep his momentum going.

The 2020 World of Outlaws Morton Buildings Late Model Championship Series is currently at its halfway point, but it looks like it’ll be a close affair between the current top three drivers for the title. You can watch round six of the competition over on the iRacing channel on Monday, 27 June.

Will Benecke and Sanchez stay on the rise?

On 1 August, the 2020 Porsche TAG Heuer Esports Supercup takes place on the Road Atlanta. Three drivers have been performing exceptionally well over the past few rounds, being Sebastian Job, Maximilian Benecke and Alejandro Sanchez. The 20-year old British driver Sebastian Job has been a joy to watch, already taking home two main race victories over at Circuit Park Zandvoort and Donington Park Circuit in rounds one and three.

After the last round at the Silverstone Circuit however, eyes are mostly on Maximilian Benecke (who recently set an iRacing World Record) and Alejandro Sanchez. Especially the latter has been on the rise after winning the previous race, leaving both Benecke and Job behind him. In the standings Job is still on top, but he certainly isn’t out of reach. The Road Atlanta might offer Benecke and Sanchez the perfect opportunity to make a move.

It’s also worth taking a look at Jeremy Bouteloup. The Frenchman won the Sprint race in the previous round and ended up taking fourth place. It was an amazing performance he’ll certainly want to build on, especially considering his earlier results. Watch the next round of the Porsche TAG Heuer Esports Supercup on 1 August over at the iRacing YouTube channel.