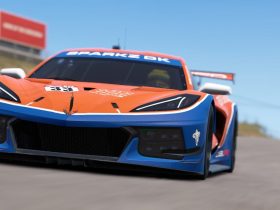 Can Version 1.2 save Automobilista 2?

Next week features the eNASCAR playoffs’ final round and the latest MotoGP Esports series event.

There’s an action-packed week of sim racing ahead with critical rounds in the 2020 eNASCAR Coca-Cola iRacing Series as well as the 2020 MotoGP eSport Championship and the 2020 iRacing Rallycross World Championship.

The penultimate round of the 2020 MotoGP eSport Championship will feature races at two legendary circuits for bike racing. Misano and Phillip Island will play host to rounds five and six of the series.

His brother Cristian sits 29 points adrift in second-place, but five-points clear of two-time MotoGP Esports champion Lorenzo ‘trastevere73’ Daretti. Reigning series champion Andrea ‘AndrewZh’ Saveri is having a difficult season and has 51 points fewer than leader Cristian. It may prove to be a case of now or never for Andrea.

The two races will be live-streamed on MotoGP’s Youtube and Twitch channels on Friday from 4PM BST.

The top four drivers following the conclusion of the third and final eNASCAR playoff this Tuesday night (US time) will fight it out in the season finale at the virtual Homestead-Miami Speedway on November 3.

This makes this week’s race the most important of the season so far, with the drivers getting their last chance to qualify for one of those top four spots. A prize of $100,000 awaits whoever can triumph in the season finale.

Bobby Zalenski won the opening Playoff round at the Charlotte Roval. William Byron Esports’ Nick Ottinger emerged victorious last time out at Kansas Speedway. His victory secured him a spot in the final alongside Zalenski, meaning there’s only two remaining spots left to fill.

Heart-pumping action from the Heartland!

The 40 driver-field will be battling it out around the Texas Motor Speedway, with six drivers still eligible to clinch one of those two places in the finale. The driver who wins that race – as well as the driver with the most points – will join Zalenski and Ottinger in the all-important finale.

Denny Hamlin Racing’s Keegan Leahy should be among the favorites after he led the majority of the previous race at Kansas. His victory chances were curtailed by an ill-timed caution period and a spin. Jimmy Mullis has the best chance of progressing with the most points.

You can watch the final round of the Playoffs this Wednesday night at 9 PM ET on iRacing’s YouTube channel.

The 2020 iRacing Rallycross World Championship will make its second visit to the famous Hell Lånkebanen circuit on October 31st. The virtual Norwegian venue hosted the first round of the season, which was won by rookie Ilari Lamminsivu.

Despite Lamminsivu’s somewhat surprising feature race win, it was Red Bull athlete Mitchell deJong who scored more points than any other driver. The fifth round of the season will be broadcast live on iRacing’s YouTube channel at 8 PM CEST.

The ADAC GT Masters eSports 2020 series will enter its penultimate round on October 31. The glorious victor of the previous race on October 17 was Jack Keithley who now comes in second in the overall standings, just four points short of Nikodem Wisniewski. The German Moritz Löhner came in second in the race on the Red Bull Ring Spielberg. He now places third in the overall rating.

The racers in the top three positions will continue their battle for first place on Halloween. The sixth round of the tournament will begin at 5.30 PM CEST and you can watch the livestream on the ADAC YouTube channel.

Which of next week’s events are you most excited to watch? Tell us on Twitter at @Overtake_gg!