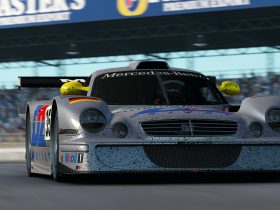 12 sim racers will compete for a ‘once in a lifetime’ experience in the final of the Lamborghini inaugural esports competition.

The Real Race 2020 marks the Italian manufacturer’s first foray into the virtual world. Over 2,500 gamers from 106 different countries attempted to qualify for the final of the esports competition on Assetto Corsa Competizione.

Five qualifying events took place at Spa, Monza, Nürburgring, Suzuka and Laguna Seca, with the 12 top sim racers booking their ticket for this Thursday’s final. It will feature races at the Spanish Grand Prix venue in Barcelona and Mount Panorama – famous for hosting the annual Bathurst 1000 and the Bathurst 12 Hour races.

The three winners will receive a ‘once in a lifetime’ prize as they’ll be invited to Lamborghini HQ to use the R&D simulator to test some of the latest Lamborghini racing cars. On top of that, they’ll meet and receive training from official Lamborghini drivers.

The prize will not be constrained to the virtual world, as the winners will have the opportunity to drive Lamborghini’s Huracan Super Trofeo at Imola – which F1 will return to this November for the first time since 2006.

Who are the finalists?

G2 Esports’ Nils Naujoks, who represents Red Bull, heads into the last event with a tentative pre-event favorite tag after he booked his place in the final in the opening qualifier and won the SRO E-Sport GT Series Championship title back in August.

He’ll face stiff competition from fellow experienced sim racers such as Arnaud Lacombe, who took part in the final of the inaugural GT Academy series in 2008. Another of the favorites among the 12 finalists is World’s Fastest Gamer finalist and three-time Project CARS world champion Kamil Pawlowski.

Naujoks will also have to contend with G2 stablemate Arthur Kammerer and 2019 Ferrari Formula 1 Esports driver Gianfranco Giglioli as well as Jesus Sicilia – champion of the Silver class of the SRO E-Sport GT Series back in June.

When is the final and how do I watch it?

Are you excited for Lamborghini’s epic esports finale? Tell us on Twitter at @overtake_gg!