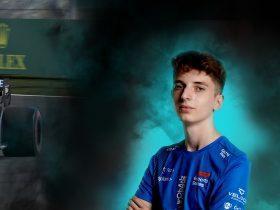 From grand tourers to motorbikes over to endurance races: the past weekend offered tournaments in a variety of different sim racing disciplines. If you missed the action, we will inform you about all highlights with our weekend recap.

Four more participants for the FIA Gran Turismo Championships 2020 Series have been decided – and it could not have been any closer. The Americas Regional Finals for the main event took place on Sunday, November 29. The 16 participants had to prove their skill in three rounds and the final top four received a golden ticket to the World Championship.

Brazilian sim racer Adriano Carrazza managed to win the last round at the Sardegna Road Track A – and with it, the entire Regional Qualifiers. Despite Carrazza already cheering once reaching the finish line, he did not immediately realize what he had just accomplished. In the post-race interview on the stream, the winner said he was extremely happy with his performance as he had a great hot lap and good fights in the last race.

When asked if it has already sunken in that he is the American champion, Carrazza replied with: “I don’t know if am the champ. Am I the champion? of America?”. After receiving the confirmation, he finally cheered with a loud “Yes!”.

We think @CarrazzaAdriano enjoyed that one 😉

The final standings were extremely close, as all three racers that made it to the podium acquired 38 points overall. Angel Inostroza and Andrew Brooks scored a top three finish in all three rounds, which secured them their slot in the World Cup. Brazilian Lucas Bonelli was only 0.005 seconds faster than his opponent in the final race. His overall performance was enough to grant him the fourth and final spot in the main event.

Formula 3 racer Igor Fraga participated in the qualifiers as well but unfortunately, he couldn’t excel and finished in eighth place. For more information about the FIA Gran Turismo Championships, you can head over to our tournament coverage.

These four drivers qualified for the World Finals:

It does not get any closer than that 😅

The 2020 MotoGP eSport Championship came to and end last Friday, November 27. On the Circuit Ricardo Tormo, a new champion was crowned: Adrian Montenegro. The Williams Esports racer, who competed for Red Bull KTM Factory Racing in this championship, managed to land on the second place in the final race, which granted him enough points to claim the first place of the Championship.

Not only did Montenegro win the title as MotoGP champion and a giant trophy, he also scored a BMW M235i xDrive Gran Coupe road car. The new winner seemed happy in the post-race interview, as he trained hard. He dedicated his win to his family and friends – and the driving talent definitely lies in the family. His brother Cristian Montenegro climbed to the third place and won a gaming laptop.

Tournament runner-up was Lorenzo ‘trastevere73’ Daretti. He can now continue to practice his skills in the real world, as he won an Aprilia RS 125 GP Replica motorbike.

We have a new champion! 👑@73trast wins the last race of the year as @26_adriaan becomes the 2020 #MotoGPeSport Champion with his brother @mmandzukic17_ finishing in third place 🙌#eSports pic.twitter.com/lynxGPtitT

From speedy two-wheelers to long endurance races that demand the patience and concentration of drivers for six hours straight. Round two of the 2020-2021 24H Series Esports took place on the Sebring International Raceway, November 29.

Ronin SimSport claimed the victory in this round, with Filip Mitrevski and Vincenzo Amico as drivers. The two were driving a Mercedes AMG GT3 and established a lead of around 11 seconds over runner-up, Biela Racing Team. Third place was claimed by Maniti Racing.

Originally, it seemed like Williams Esports was on a straight road towards victory. Unfortunately, their driver Dominik Staib faced issues with his sim rig and they had to stop racing one hour before the ending.

Many congrats to @RoninSim on the overall victory at the MAHLE 6h Sebring powered by VCO! 🏆👏🏼

Huge congratulations to our class winners as well:

Do you think Carrazza could even win the World Championship? Tell us on Twitter at @overtake_gg!