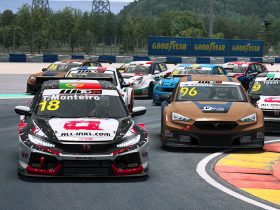 For more information on upcoming and on-going events, check out our event calendar.

The Subaru iRX All-Star Invitational came to an end on Sunday with the Grand Final on Hell Lankebanen. Mitchell deJong was considered the favorite for the final round: the American won four of the five races prior to the finale.

His dominance ended on Saturday. DeJong trailed behind and landed on the ninth place. Finnish esports racer Sami-Matti Trogen made it to the top again after already beating deJong on the only track he lost before. Craig Been followed Trogen on second place with a gap of +2.407 seconds, Travis Pecoy got third with +2.763.

However, thanks to deJong’s outstanding performance in the previous rounds, his lead was large enough to come out first in the total ranking and win the Subaru iRX All-Star Invitational. The series champion won $5,000 to donate to a charity of his choice. As he revealed in the post-match interview, he will help out the NPO Feed the Children with his winnings.

The Porsche Mobil 1 Supercup Virtual Edition staged its grand finals on Saturday as well. Round 7 and 8 were held at the virtual Autodromo Nazionale Monza in Italy.

Dutch esports racer Larry ten Voorde from Team GP Elite ended up fist place in both rounds. He and Ayhancan Güven from Turkey delivered exciting duels in the first match, but Güven fell off in the final lap after hitting the curb. A strong lights-to-finish victory in the second and final round ensured ten Voorde the title as champion of the Porsche Mobil 1 Supercup Virtual Edition.

The first half of the Formula SimRacing World Championship 2020 series is over. Jerney Simoncic from Burst Riotoro Esport got to the first place at Azure on Sunday. His victory in the fifth out of ten rounds established his lead in the overall rankings. Dennis Jordan and Alex Siebel finished second and third respectively, but their success could not get them into the top 3 of the overall ranking.

On May 31, the Formula SimRacing World Championship 2020 goes into the next round on Silverstone in Great Britain.

MotoGP hosted the first digital MotoE on Sunday – with great success, as they collected much positive feedback from their community on their homepage. Over 186,000 viewers tuned in to the event on YouTube.

Italian motorcyclist Matteo Ferrari got from pole position to crossing the finish first, making him the first virtual MotoE winner. His fastes lap on the Misano World Circuit was 01:37.023. Eric Granado from Brazil followed Ferrari with a gap of +3.967. Granado revealed on Twitter that he is quite happy with his results. With Mattia Casadei on third place, another Italian made it to the podium. He was behind +10.014.