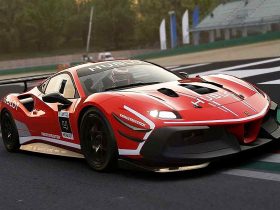 Australian Joshua K. Rogers won both races in round five of the Porsche TAG Heuer Esports Supercup, thanks to a mistake from one of his competitors.

Former iRacing world champion Joshua K Rogers has catapulted himself into first place in the 2021 Porsche TAG Heuer Esports Supercup. The Australian scored an impressive double victory in round five out of ten last Saturday, February 20.

What a finish! Honestly in shock with that one, double win after an insanely stressful race 🥇🥇

Winning on the last corner

Round five took place on the Atlanta circuit. 21-year-old Rogers managed to win both the sprint race and the main race. While Rogers put on a strong performance, it was originally US-driver Mitchell deJong who led the race. Closely behind him, Kevin Ellis Jr. and Rogers managed to catch and eventually overtake the racer in first place.

However, deJong spun off track and fell behind only a few seconds away from the finish line, giving Ellis and Rogers the lead. Ellis spun out only moments after as well, which secured victory for Rogers.

What is the PESC?

The Porsche TAG Heuer Esports Supercup (PESC) is an annual iRacing world championship. The 2021 edition consists of ten rounds and sports a $200,000 prize pool. Joshua K. Rogers was able to win the first iteration of the event, whereas Red Bull’s Sebastian Job won the 2020 tournament series. For overall standings and results, check out out coverage.

What did you think of the latest PESC round in Atlanta? Tell us on Twitter at @OverTake_gg or in the comments down below!