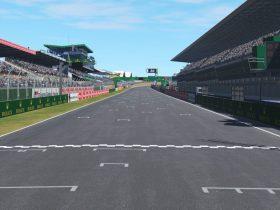 In the Logitech G Challenge Pro-Am race, it was NASCAR racer William Byron who captained his team to glory over F1 star Lando Norris.

Whilst most of England and Denmark held their breath during the intense semi-final, a collection of pro racers, content creators and other celebrities had a bit of fun on iRacing in the Logitech G Challenge Pro-Am event on Wednesday.

McLaren’s F1 star Lando Norris and NASCAR’s William Byron picked the drivers who would be scoring points for their teams. The drivers competed on Daytona International Speedway oval course in a Chevrolet Camaro ZL1 stock car and at Monza in the Dallara iR-01, covering both areas of expertise for each respective team captain.

Don’t miss any of the action on July 7, 12PM PDT Live at https://t.co/djApZHOWTd pic.twitter.com/Zz7S2xX3oy

WHAT HAPPENED IN THE EVENT?

Byron’s team was made up of Felix Rosenqvist, Benjamin ‘Tiametmarduk’ Daly, Parker Kligerman and streamers Rory Plays and Annemunition, whereas Norris’ team consisted of Robert Wickens, Tony Kanaan and musicians ASAP Ferg, Micky Blue and The Vamps’ Connor Ball. A very diverse set of players with all varying applications of skill-set towards sim racing, so the field spread would be large.

In the first race, ASAP Ferg elected to ignore the pace car leading them to green, but seemed to struggle as he was quickly caught. In the initial stages, William Byron and Parker Kligerman were employing bumpdrafting tactics to get them away from the rest of the field but they got caught out and spun off together, leading their teammate Tiametmarduk to battle with Lando Norris and Robert Wickens.

Only a few laps from the end though, a move by Tiametmarduk caused Lando to spin off and collect his teammate, which handed the lead on a plate back to Kligerman and Byron who duly accumulated a healthy number of points for Team Byron. Meanwhile the best of the ‘non-racing’ competitors was Team Norris’ Micky Blue who finished eighth out of twelve classified finishers.

From Byron’s area of expertise in the NASCAR on the oval to Norris’ with the open wheel car at Monza, but it was Byron’s teammate Felix Rosenqvist who trounced the rest of the field to take pole position by more than half a second.

The race itself was more reminiscent of an open lobby on the F1 game with the chaos that ensued, with Rosenqvist keeping his nose clean to take a dominant victory and assisting in Team Byron winning the battle against Team Norris. Out of the ‘non-racers’, it was Connor Ball who took the honours with eighth.

Congrats to the team! Who was your MVP?

Thanks for watching and make sure you’re ready to hit the track in the 2021 season of the Logitech McLaren G Challenge: https://t.co/Pnc0OjmDaU pic.twitter.com/v47bXCubvQ

In short, the racing was not meant to be completely serious and nothing was on the line so it was a bit of fun and entertainment – perhaps something that that sim racing world needs more of. We all like our racing when it’s serious, but the beauty of virtual motorsports is the accessibility and how it can attract a new audience with the help of someone who has influence and is hopefully there not because they were told to by sponsors.

The racing here was acting as a pre-cursor to the new season of the Logitech G Challenge of which you can be a part of. Players from four different regions (North America, Latin America, Asia-Pacific and Europe/Middle East/Africa) can enter qualifications through iRacing in a stock car or open wheeler, or on Assetto Corsa Competizione in a McLaren GT car.

It’s lights out for the 2021 @LogitechG McLaren G Challenge! 🚦

Get behind the wheel in the qualifiers throughout July.

The 2021 G Challenge Series starts this month and runs all the way through November, with five rounds of monthly races for each of the four regions. A qualifying period proceeds the race with the best 30 qualifiers from all three qualifiers making the races which are streamed to the official Logitech G Twitch channel.

Players who finish in the podium finishing places in all the races and those who accumulate enough points, the top 30 will qualify for the semi-finals. In the semis, the top 10 finishers in the open wheel, stock car and GT car challengers from each region will qualify for the grand final which means 120 players will earn the chance to go to Las Vegas for the Grand Finals.

The winners of the stock car, open wheel and McLaren GT car finals will earn the opportunity to go to the McLaren Technology Centre for a tour, coaching from Lando Norris himself and VIP access to the McLaren garage at the 2022 British Grand Prix.

To find out more, go to the official Logitech G website and who knows, maybe you will be the lucky winner!

ARE CELEBRITIES RACING A GOOD THING?

Since the world of motorsport was brought to a standstill, virtual racing ascended to new heights and we began to see a plethora of events being held to keep us entertained. On the one hand, you had the very professionally held events where drivers were asked to bear in mind that they were expected to approach it like a real race.

But with the strong level of accessibility came a new influx of competitors. For example, when the Australian Grand Prix was cancelled in 2020 and Veloce Esports  decided to host a race on the Albert Park circuit in the F1 game. Real Madrid goalkeeper Thibaut Courtois asked to be a part of it and he pleasantly surprised a lot of us.

But then when sponsors got involved, Sergio Aguero was given a simulator to compete in the Virtual Spanish Grand Prix, even though he most likely never took an interest in any of it. It just meant they could put him in front of the F1 drivers in the advertising for the event.

When other notable individuals from the sports and entertainment industry get involved because they really want to be, it’s a great thing. It drives new audiences into the virtual racing world, since anyone can see themselves racing alongside a Formula One driver even if they aren’t as quick as them.

Did you enjoy the Logitech G Challenge Pro-Am event? Tell us on Twitter at @OverTake_gg or in the comments down below!