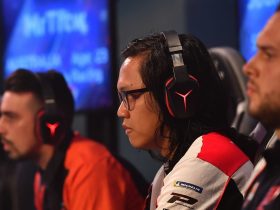 The Le Mans 24 Virtual yet again proved a landmark in esports racing, and it went the way of sim racing team giant Redline.

The Le Mans Virtual Series rounded out its first season with the second running of the immensely successful 24 hours of Le Mans Virtual, and both the class wins and championships went the way of Team Redline.

It’s @Max33Verstappen who takes the lead at the start!

And it’s a mostly clean start for both LMP and GTE!#LeMansVirtual pic.twitter.com/RcpnEphzGq

In an incredibly close qualifying session, the #70 Realteam Hydrogen entry narrowly managed to secure pole position ahead of newly crowned F1 champion Max Verstappen in the #123 Team Redline entry by just two thousandths of a second! Only a few hundreths behind was the #67 Mercedes-AMG Esports car which featured F1 Esports champion Jarno Opmeer, and then it was the #28 Veloce Esports entry with British GT race winner James Baldwin at the helm.

That was just in the LMP class, but GTE also had quite the surprise result. Two-time Porsche TAG Heuer Esports Supercup champion and F1 Esports racer Sebastian Job pulled out a mighty lap in the #111 Red Bull Racing Esports entry, and put the un-favoured Corvette C8 ahead of the two favourites for pole, the #91 Porsche Esports Team and #71 BMW Team Redline.

At the start, the #70 Realteam Hydrogen entry piloted by Drugovich let Verstappen through heading into Tetre Rouge on the first lap, and the Dutchman then set about rocketing into a sizeable lead whilst everyone did battle behind him. Meanwhile in the GTE field, the #91 Porsche jumped the #111 Red Bull Corvette to get an early advantage whilst its sister car #92 Porsche got ahead of the #71 BMW Team Redline.

Early on, there was heartbreak as the all-women W Series entry were the victims of a software issue just before the formation lap and were unable to rejoin the server, depriving them of any chance of turning a wheel in anger before the race had even started. W Series pro racers Fabienne Wohlwend and Ayla Ågren as well as their sim racers Emily Jones and Lyubov Ozeretskovskaya were left to cheer for 2019 W Series runner-up Beitske Visser in the #10 MAHLE Racing Team entry in the LMP class.

Another early retirement was the #67 Mercedes-AMG Esports entry after Dani Juncadella mistimed a downshift. He overrevved and broke the engine, resulting in him and his teammates Opmeer, Bono Huis and Ross Gunn having to cut their Le Mans Virtual effort short.

Super exciting to see the best RL & Sim racers racing against each other! 🙏pic.twitter.com/dONok1Os2R

Back at the front, it was becoming a tale of two drivers, both of whom have plenty of experience in both real and virtual motorsport. Verstappen of Redline and Baldwin of Veloce were in a league of their own in those first six hours, swapping the lead as each other came in. However for the newly-installed F1 champion, even he made an error. Halfway through the race with a massive lead, Verstappen lapped a car heading into the Ford chicanes, and lost control after taking the kerb slightly wrong. The subsequent crash resulted in a broken engine.

It forced Verstappen to have to retire the car after absolutely dominating the race. Later, the #28 Veloce Esports car also had to withdraw when they ran out of fuel with three hours to go in the race. There was plenty more incidents in the LMP class, such as Indy 500 winner Juan Pablo Montoya who was racing with his F4 racing son Sebastian as well as the top two from the Le Mans Virtual Cup in the LMVS Guest Car entry, and he put the car into the wall breaking the rear wing.

In the #56 Team Project 1 x BPM Porsche GTE, our own René Buttler was terrorising renowned sim racer Jimmy Broadbent. Before the race even started, the team were burdened with a penalty. Why? Well, the rules state you have to field two real-world pro racers at minimum. Broadbent, thanks to his real-world racing efforts in Britcar driving the Praga R1, was designated as a ‘Racer’.

However, the organisers decided that René (who has vastly more real world experience than Jimmy) was a ‘Gamer’ and as such, they had to take a six-minute stop-and-go penalty. It didn’t help when René decided to get Jimmy all flustered when timing him down to get out of the pitbox.

You can go back and catch it all on Jimmy’s stream, where he attempted a last-to-first challenge but ended up 13th in the GTE class, just ahead of the sister car, the #57 Team Project 1 x BPM.

Another cool thing that took place during the race was that the Wolves GR Esports team had both their sims stationed in their football ground, Molineux stadium, overlooking the Wolverhampton vs. Southampton match. During halftime, the stream was featured on the big pitch-side screens for all 30,000 attendees to see!

Four hours in to the Le Mans 24 Virtual and not only have we seen @Wolves earn a great win on the pitch but our Wolves GR Esports team are in a very strong 13th and 14th position on the track! 🤩

Championship-wise, both winners won their respective championships. #70 Realteam Hydrogen Redline won by the microscopic margin of half a point over the #1 Rebellion GPX Esports who finished the race in second around a minute and a half down on the winner. GTE winners #71 BMW Team Redline retained a much healthier advantage of of 25.5 points over the second-place finishing #91 Porsche Esports team, who finished over 30 seconds back.

Driving the GTE class winner to the flag was Siggy, who was joined in his home by Rudy van Buren who had to quickly make the trip to Siggy’s place when his sim equipment failed and he finished his stint on a different sim rig to the one he started in. He was there to celebrate the double win and the championship with Siggy, and team director Atze Kerkhof couldn’t hold back his emotion seeing Reitveld and Siggy bring their cars home. Redline netted $60,000 of the $250,000 prize pool as a result.

Thank you to everyone who played a part in the series. From Monza to Le Mans – it’s been some journey.

Teams, drivers, support teams, partners, organisers and to every follower. You are legends 🙌#LeMansVirtual pic.twitter.com/c8Hm2kZxzo

What did you make of the second Le Mans 24 Virtual? Tell us on Twitter at @OverTake_gg or in the comments down below!