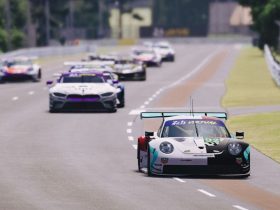 67,000 entries across the globe, four months of qualifiers and it all peaked at one final match day. The elite of DiRT Rally racers competed against each other at the finals of the DiRT Rally 2.0 World in the Birmingham NEC Arena on January 12. Both, the winner of the Rally tournament as well as the Rallycross took home $2,500 and the title as world champions.

The top two of each platform, Playstation 4, Xbox, and PC, made it to the DiRT Rally finals. Six participants entered the tournament. The finals consisted of four stages. All drivers participated at the first four stage and the cumulative times of each driver were added to determine the top three players across the initial four maps.

The top three then entered the final stage where their previous times were completely reset. Then, the three racers drove the final map one by one with Polos. Whoever received the best time out of the three wins the final and with that the title as world champion.

The map Germany Oberstein heralded the epic finals. Finnish player Joona Pankkonen counted as one of the tournament’s favourites defending his title from 2019. The reigning world champion quickly proved that he still is an incredibly skilled driver and took home the first map. Paul Beghin had to face a 10 seconds penalty after cutting corners and finished the stage last.

Stage two was the snowy Sweden Stor-jangen Sprint. Dave Marshal was able to win the circuit with an incredibly narrow lead of 0.5 seconds before runner-up Pankkonen.

Next, the drivers had to compete at Argentinia Las Juntas, the track which is notorious for punishing mistakes most mercilessly. The scoreboard leaders Pankkonen and Marshal struggled on the difficult map even crashing two times. Last year’s runner-up Robin Jonsson took advantage of their problems and took the stage.

Monaco’s Pra d’Alart was the last map of the first phase which ultimately determined which players would make it to the finals. Marshal won the track which earned him a spot at the last stage, alongside with Jonsson and Pankkonen. For the bottom three drivers, their run was over.

On the final map, times were reset to zero and players had to drive one after another. Rockton Plains is a quite narrow and rocky track which is also very fast and flowy since there are not many corners.

Marshal went first on the stage but blew his chances with a crash where his car nearly rolled over. He finished by setting a benchmark of 3:26 minutes.

Pankkonen entered the stage after him and delivered a nearly flawless run during the majority of the map. He then made two small mistakes crashing into a fence and slightly getting off the road shortly before the finishing line. He still was able to break Marshal’s time with 3:14 minutes.

Jonsson now had to undercut the 2019 world champion’s time. His run was almost perfect flawless, but then he slightly clipped the barrier. Despite only making one bigger mistake, he ended the map just a single second more than Pankkonen.

This one second was enough for the Finn to reclaim his title from last year. Despite having less time to practice since he joined the military as he commented, his skill was still enough to be crowned world champion once again.

The Rallycross featured the top two players across three platforms as well. The drivers first had to complete three stages with two races over four laps each. Then, the final was played over six laps. All racers had to ride the Peugeot 208 WRX which won the Rallycross last year.

French PS4 player Killian Dall’olmo delivered an outstanding performance throughout the entire tournament. He managed to win four of the six maps and made several highlight plays, such as an insane overtake on the Yas Marina Circuit and his car rolling over and still getting into top three on the same map.

With his victory spree, he entered the final map Lydden Hill England as the favourite – and he lived up to the expectations.

The final quickly became a race between Marshal and Dall’olmo on top. However, Killian was not only able to keep the gap between them, he also expanded it. With a three-second lead, he took the final maps as well as the title as DiRT Rallycross world champion.