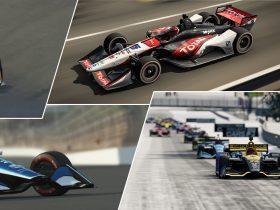 In a day of surprisingly clean 2020 iRacing Rallycross World Championship action, it was the 2018 champion Mitchell deJong who finally claimed the win. It was his 11th iRX victory of his career, yet it was only his first in 2020.

The seventh round of the iRacing series took place at the Lucas Oil Raceway in Indianapolis. Going into the event the top three in the championship were all still in with a shout, as Team Yokohama drivers Jon Robertson and Yohann Harth led the way from deJong in third.

The circuit is known as one of the better venues for overtaking on the iRX calendar. While the track lived up to its reputation with plenty of passes in the midfield, there was rarely any action towards the front.

The first heat involved the eventual feature race winner deJong, who came home in first with Tommi Hallman comfortably in second. Heat number two brought victory for another of the championship contenders, namely Yohann Harth. The Team Yokohama driver led comfortably off the line and his progression to the feature race was never in doubt.

Then it was time for the third heat, in which Garrett Manes emerged on top. The fourth and final heat was where championship leader Jon Robertson found himself. Jon and his brother Jake Robertson finished first and second respectively, and therefore qualified for the feature race.

So then, to the feature race. DeJong started from the front and got away well. However, the American made contact with his compatriot Manes into the first corner. DeJong himself was unharmed by the incident, but championship contender Yohann Harth was forced to cut turn two to avoid the stricken Manes. In doing so, Harth picked up a slow-down penalty. This allowed Tommi Hallman to claim second.

More points in the bag !👜
Lucas Oil Raceway is a tough unforgiving place, but Team @yokohamatire powered by @Yohann_Harth and Jon Robertson battled hard in the main event to secure 3rd and 5th place finishes 💪#stillleading

From this point on it was smooth sailing for the front runners. Further behind, though, it was a very different story. Jon Robertson lost out to Jonne Ollikainen, who was charging through the field after making it through the last chance qualifiers.

After that, Robertson embarked on a race-long battle with deJong’s Subaru Motorsports USA teammate Bobby Zalenski. After some passing and re-passing, Robertson finally pipped Zalenski on the final lap to salvage fifth place.

The result brings third place finisher Harth closer to Robertson at the top of the standings, while deJong closed on the pair of them. The three-way fight for the title is primed to continue for the last two rounds of the season.

The Trackmania Grand League – Fall 2020 Season Combine match took place as well this weekend. The two-day event involved sixteen drivers taking part in four different disciplines to decide who of them would get a spot in the TMGL’s next season.

On Saturday November 14, the first two rounds of the combine match took place. The first of these was a series of two-lap elimination races. At the end of each race, the last-placed finisher was eliminated until there were only two drivers left standing.

A straight duel between Patrick ‘Mudda’ Radisich and Nico ‘Granady’ Gyarmati ended in thrilling fashion. Granady crashed in the final corner of the final lap, allowing Mudda to claim the full points from the first event.

Mudda would prove to maintain this momentum throughout the next three events, finishing first in points among the OGL drivers. Mathieu ‘Link’ Oudeville, who seemed to improve with each new event, will join him in the TMGL next season.

The Combine match is over and @TmMudda from the Open Grand League is your winner. The Australian player and @tm2link will both be part of the TMGL Winter 2021 season. #TMGLFALL2020 pic.twitter.com/vpQPcbhSPg

Of course, space needed to be made for these two drivers. The Brazilian Mateus ‘matt’ Bohrer struggled throughout and finished fifteenth overall, confirming his relegation.

The battle for the final spot in the TMGL went down to the wire between Yann ‘Yannex’ Perroulaz and Burim ‘riolu’ Fejza. In the end, it was Yannex who lost out, as a lackluster performance in the final event sealed the Swiss driver’s fate.

What did you think of deJong’s performance? Tell us on Twitter at @overtake_gg!