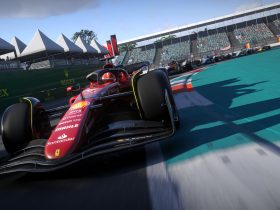 F1 22 Multiplayer Guide: How to be Faster

These are our absolute highlights from Clash of Racers II!

It’s a wrap! Our tournament Clash of Racers II took place last Sunday, December 13. Our racers and their teams definitely had a blast, as much as we did hosting it. Now that it’s over though, there is only one thing left to do: let’s lean back and reminisce about the event in our Clash of Racers II recap!

Both of our competing teams were hungry for the win right from the start! Team GREEN was on for the challenge and showed its competitive side even before the actual races began: MaximeMXM made a clear statement about how little she expected from the opposing team. “They are not quick enough and we will pass them easily,” she declared confidently.

Unfortunately, Team GREEN couldn’t live up to Maxime’s predictions at first. Jakob ‘YamatoCannon‘ Mebdi lost the Qualification Round before iRacing to a clearly superior Eefje ‘sjokz’ Depoortere in baking gloves and diving goggles. She took home the victory in the Carrera track challenge and created an advantage for Team RED right at the start.

And @sjokz takes the win in the first qualifying challenge! 🙌 #TeamRed

On the track, competition was even harder than in the studio. Team RED’s Cyanide had no intention of going easy on Jaroslav ‘Jardier’ Honzik and refused to let him take the better position without a fight, so he resorted to a more assertive driving style in F1 2020. Bumping into his opponent as he went, Cyanide made Jardier spin and shamelessly took his position. But Maxime stayed true to her words from before the races: on lap three, she punished Cyanide for how he treated her teammate and overtook him easily.

After the rounds in F1, however, things didn’t look too bright for Team GREEN. As Yamato spectacularly lost the first Carrera track challenge to sjokz, frustration started to build among his racers. Jimmy Broadbent was the first to voice his disappointment in the captain.

Apparently, the banter is not limited to the other team. 😂 @JimmyBroadbent @YamatoMebdi #TeamGreen

The wake-up call from his teammate seemed to have an impact on YamatoCannon, as he managed to make a great comeback in the second Qualification Round featuring Mario Kart Live: Home Circuit. Greatly profiting of sjokz getting lost in the studio, he took the win and therefore control over the grid in the first round of iRacing. This segment also showcased the masterpieces by the winners of our livery contest!

Congrats and thanks to Payton M. and Julien R. (@Baradras) for winning our #ClashOfRacers livery contest! 🎉

Want to see them in action? Tune in now! 🔥

Growing tension in the second half

After the second racing segment, it was crunch time for Team GREEN, as they were already twelve points behind their opponents. This seemed to give an extra boost to Team Captain YamatoCannon. He and his temporary teammate René Buttler clearly decided the Qualification Round in Autoball for the green side and created an advantage for the team.

The Trackmania segment, however, Team RED’s Emily Jones and Team GREEN’s Jardier were often head to head. However, the green side was still in a tough spot. This meant that in the last segment of Assetto Corsa Competizione, it was make or break for Yamato and his teammates!

Before the final races in ACC, there was one last hurdle to overcome for our Team Captains. In another trial of Mario Kart Live: Home Circuit, the difficulty was taken up a notch with our “Don’t drink and drive” challenge! The smoothie that came with this one ruined sjokz’ win in the first round, so there was a rematch, which a highly motivated YamatoCannon was able to take home. His humble victory speech refered back to his failure in the first Qualification Round and handed the baton back to his teammate Jimmy Broadbent for the last phase of the tournament.

In the end, ACC expert Jardier was able to claim pole position after red side’s Emily Jones was taken out of the race by a crash-hungry Team GREEN. But before Yamato’s team could celebrate their victory, there was still the award section at the end of the tournament to overcome. Three awards were given out to the racers: Best Crash, Most Positions won and overall MVP of the tournament. The first one went to Cyanide, the second and third both to Emily Jones, who was really able to showcase her racecraft during the tournament. With all of the awards then going to Team RED, even Jardier’s great performance in ACC couldn’t save the win for his team: sjokz and her racemates got to lift the trophy!

And that was it for the second edition of Clash of Racers! Our racers and team hope you had as much fun as all of us did and we can’t wait to welcome you again for future events. A huge thank you also goes out to our partners AOC, TAG Heuer and Carrera, who made the event possible and also provided the great prizes for our Clash of Racers II raffle. Thank you for tuning in and cheering for the captains and their teams!

For those of you who missed our stream but still want to watch the event: Feel free check out the VoD on YouTube or Twitch!

What was your Clash of Racers II highlight? Tell us on Twitter at @OverTake_gg or in the comments down below!