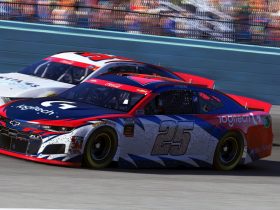 Opinion: Why iRacing’s eNASCAR is the best sim racing show

15 finalists did battle across two races at Silverstone and Hockenheim to win an all-expenses paid trip to Porsche’s Experience Centre in the latest regional Forza Motorsport 7 competition. Williams Esports’ driver coach Christopher ‘Craviator’ Farkas controlled proceedings in the opening race at Silverstone to move into the championship lead ahead of the final race.

That second race at Hockenheim reversed the results of the opener to set the grid, meaning Farkas started 15th and last while Filipino racer Francis Arjonillo started from reverse-grid pole. Eric Gerard Gaac stormed from fifth on the grid to overhaul Arjonillo for the lead of the race on the second lap.

Arjonillo re-took the race lead shortly afterwards, but 23-year-old Australian Smith caught onto the back of the leading duo on lap four despite starting down in 13th position. Smith passed Gaac on the exit of Turn 1 and he sent it around the outside of Arjonillo at the next corner in an attempt to take the lead.

Only one point separates the best

Then Arjonillo and Smith made minor contact, with Smith emerging just ahead. Smith dominated the seven-lap race thereafter to take the win and the championship. Farkas spent the majority of the race in the midfield scrap and he just pipped Arjonillo to finish in fourth place. Geoff Newton took second place in both races, and he just missed out on the title by a single point.

Farkas placed third in the drivers’ championship despite a dominant winning performance in the first race. The top five was rounded out by New Zealander Brook Reeve and Arjonillo.

The worthy champion Smith will get to enjoy an all-expenses paid trip to Porsche’s Experience Centre at Hockenheim. Each of the top three finishers will also be awarded a Tag Heuer watch and $500 of Hugo Boss store credit.

What did you think of the Porsche Asia Pacific Forza Cup? Tell us on Twitter at @overtake_gg!