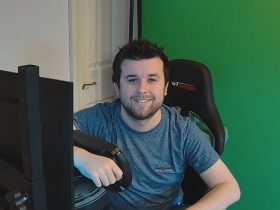 Vandoorne and Delétraz earn their first victories and claim rank 1 in their respective standings.

Vandoorne, who started his fourth out of six races from the pole position, was finally able to secure his first victory in the series. Thanks to his superior position in the starting grid, he could leave all the chaos behind him from the start.

While many drivers fell behind due to crashes and carnage, two drivers did everything they could to catch up to the Belgian driver: the winner of last week’s Tempelhof race, Nissan e.dams’ Oliver Rowland, and then-standing leader Pascal Wehrlein. However, Vandoorne pulled too far ahead of them, and they battled it out for second place.

With his impressive victory, the New York champion takes the lead in the overall standings with 105 points, with Wehrlein merely one point behind him (104 points). Their closest pursuer, the German BMW i Andretti Motorsport pilot Maximilian Günther, is far behind them with 73.

The last two races of the Race At Home Challenge are scheduled for June 6-7, 8 PM CEST. The final race awards double the points, promising a thrilling competition until the end.

Delétraz gets his revenge at Barcelona

In the third round of the SRO E-Sport GT Series at Nürburgring, Louis Delétraz (GPX Racing) conceded the race to Ben Barnicoat (2 Seas Motorsport) as he trailed 0.07 seconds behind. Therefore, he was determined to redeem himself in Round 4 at Circuit de Barcelona-Catalunya on Sunday.

In a close battle with both Audi drivers Lorenzo Marcucci (LP Racing) and Arthur Rougier (Saintéloc Racing), Delétraz managed to edge out a thin yet significant two-second lead. Marcucci posed a real threat the Porsche pilot in the final laps, but last week’s runner-up eventually escaped with a one-second lead.

With his well-deserved victory, the Swiss racer has taken the lead in the GT Series standings with 59 points, and he is heading into the final race on June 14 as the favourite. His fiercest competitor from the race, Marcucci, is also his closest pursuer with 49 points.

Up until May 31, Slovenia’s Jernej Simončič (Burst Riotoro Esport) looked almost unstoppable in the rFactor 2 Formula SimRacing World Championship. In Round 5 at Azure, he finished over 30 seconds ahead of runner-up Dennis Jordan (Evolution Motorsports).

However, Simončič showed his weakest performance of the season in Round 6 as he finished in eighth place. While he struggled, his toughest competitor, Croatia’s Petar Brljak (Edge Esports), scored his second victory of the season. This is the first race of the series, in which Simončič couldn’t land a top-4 placement.

Although Simončič holds a considerable lead as he sits 22 points ahead of Brljak, he showed that he was beatable this time around, which may prove significant with four races left in the season. Meanwhile, Germany’s Michi Hoyer (Burst Simplexity Esport), who finished second in Round 6, cemented his third place in the standings at 70 points.