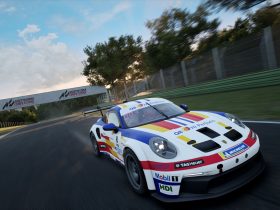 More than 3,500 racers entered the qualifiers to try and make it to those semi-finals, which were held at Imola. Löhner kicked off proceedings in the Monza finale by edging Red Bull Racing Esports Team driver Néstor García by 0.063 seconds in qualifying to take pole position for the opening race of the finale.

Florian Hasse completed the top three ahead of another two Williams Esports competitors in Nikodem Wisniewski and Jakub Brzezinski – both part of the winning 24 Hours of Le Mans Virtual team earlier this year.

Löhner fended off pressure from Spaniard García on the opening lap and dominated the race thereafter, leading every single lap of the race and beating García to the chequered flag by 3.136s. 2019 real-world Porsche Sports Cup Deutschland champion and avid sim racer Laurin Heinrich charged from sixth on the grid to claim the final spot on the podium.

The results of race one determined the grid for the second and final race. This provided a much closer fight between Löhner and García. However, the Spanish championship contender couldn’t find a way past his German rival and was forced to settle for second place once again.

García eventually fell to 2.811s behind Löhner, who made it two victories out of two. This gave him €7,000 of the €15,000 prize pool with García scooping €5,000 for his pair of second-place finishes. Heinrich took third place in race two after triumphing in a frenetic four-way fight in the closing laps of the race. He led home Wisniewski by just over three-tenths of a second.

Job’s main title rivals Maximilian Benecke and reigning series champion Joshua K Rogers collided in the sprint race. The contact between the duo left Rogers 18th at the chequered flag with Benecke out of the points in 26th.

20-year-old Job drove a measured race to finish in fourth place. His Red Bull Esports stablemate Patrik Holzmann earned his first victory of the season ahead of Kevin Ellis Jr., who charged from seventh on the grid to second place. Job survived a potentially embarrassing moment in the feature race when he was forced to take evasive action at Turn 1 to avoid colliding with his late-braking Red Bull team-mate Holzmann. Job overhauled Holzmann a moment later to claim his sixth win of the year.

Holzmann capped off what is easily his strongest weekend of the season in second place ahead of Mack Bakkum, who earned his first podium in the championship. Job’s advantage in the drivers’ championship has increased to 84 points with just two rounds to go at Le Mans and Monza.