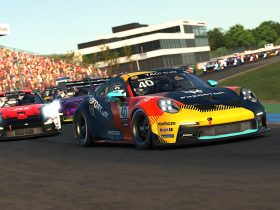 Have you ever dreamed of driving a Porsche around Silverstone race circuit? Well, now you have the chance to do just that! Porsche have announced the Porsche GB Forza Experience on Forza Motorsport 7, with the top prize of a driving experience in a 911 Carrera at the Porsche Experience Centre in Silverstone. All you have to do is beat Porsche Carrera Cup GB Junior Driver Harry King’s lap time in an open qualification round.

Do you have what it takes?

If you fancy a shot at the competition, there are a few key points to note. Most importantly, the competition is only open to residents of the UK and Ireland who are over 18 years of age. You must first register on ESL Play and sign up for the tournament to be included. And finally, make sure you use the 2019 Porsche 911 GT3 RS in all phases of the competition. If that’s all fine, you’re set to go!

To secure the chance to take on Harry, players will compete in the Porsche GB Bounty Hunt September 10-17. The 24 players with the best times then qualify for the semi-final, hosted on September 19.

The 24 players will be split into two groups of twelve, then race against each other over ten laps at the Silverstone GP Circuit. The top 6 players from each semi-final will advance to the final, where they battle it out in a final ten-lap race for victory, and the driving experience prize.

To sign up, visit the PCGB Forza Experience Portal Page.

For more information and the results of the tournament, check out the PCGB Forza Experience Tournament Page.

Are you going to take part in the competition? Tell us on Twitter at @OverTake_gg!