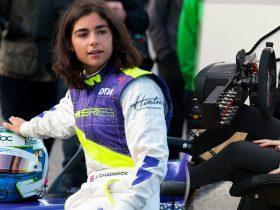 The most famous female sim racers

Only a few days left until Clash of Racers II! This is how the tournament works.

Our eagerly awaited Clash of Racers II tournament will finally go live this Sunday, December 13! You can watch the event on our Twitch channel from 6 PM CET (12 PM ET) to not miss out on the teams’ fight for the trophy. The famous esports host Eefje ‘Sjokz’ Depoortere and her Team RED will face Team GREEN, which is led by League of Legends coach Jakob ‘YamatoCannon’ Mebdi. But how exactly is the winner determined? Let us talk you through the tournament system!

Qualification rounds for the captains

The tournament itself consists of four racing segments. Only the four general contestants of each team will take part in those. The Team Captains awaits a slightly different task: Before each race, they will compete against each other in a Qualifying Round. The winner of this is given the privilege to decide the starting grid for the next segment – for the Trackmania races, the winner’s team will simply be given three extra points.

In the actual racing rounds, drivers will score points for their teams depending on their finishing position in the race. These points will be added up for each team and will later on determine the tournament’s winner. Points per position will be scored as follows:

Races that are played in a best-of-2 or more are first counted together in a leaderboard. The final placement in the leaderboard of the game determines the allocation of points.

📢 Thrilled to welcome @sjokz & @YamatoMebdi as captains for our #ClashOfRacers! 🎉

These two League veterans are familiar with excellent teamwork, but can each lead an all-star team of racers to success?

The good old Carrera Race will be the qualification round for our first racing segment. On our own Carrera track, the Team Captains steer a mini-version of the Audi DTM through three rounds. While they may get used to the mechanics in round one, the following laps will require them to wear baking gloves and blurry goggles for an extra challenge. After the winning captain determined the starting grid of round one, it’s their teams’ turn to claim victory. Our competitors hop into the virtual cars and give it their all on the famous track of Monza for five gripping laps! After that, there is still Montreal, Canada, to master for just as long.

Our iRacing segment will be preceded by the infamous Mario Kart Live: Home Circuit in our OverTake studio! Each game will take two minutes and the winner gets to decide the starting grid of the first round of iRacing. Here, the drivers face the famous track of Spa and are challenged to complete it as good as they can in the fabulous Porsche 718 Cayman GT4 Clubsport MR. And our brave competitors need to give it their all: In five of the long laps, plenty can happen to throw them off track.

📢 It wouldn’t be a Clash of Racers without a host and interviewer to guide us through it all!

Trackmania will have our Team Captains race it out in a best-of-3 in Autoball. As the format is a 2v2, even our casters and hosts will join this competition. After the winner claimed three extra points for his or her team, their mates will jump right into Trackmania‘s Time Trial. In the best-of-3 format, each of the drivers gets four minutes to smash their best lap time, with the fastest winning in the end.

Before the final races of the tournament, our Team Captains will race it out in Mario Kart Live: Home Circuit once more – with the special “don’t drink and drive” addition, they should feel a little more challenged this time around. After this, the final racing segment with ACC is going to conclude the tournament. As the last phase, it will award the players with double the amount of points they score. Round one will be fought out on the renowned Nürburgring, while round two takes us to Silverstone. Both rounds will be completed after four laps each.

In case of a draw at the end of the tournament, the amount of top-placings in the tournaments per team will determine who wins the competition.

Are you as excited for Clash of Racers II as we are? Tell us on Twitter at @OverTake_gg or in the comments down below!