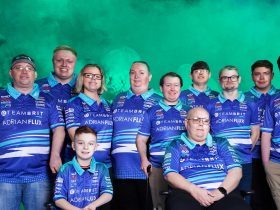 eTeam BRIT: Our April Heroes of the Month

Another major automotive brand has entered into esports racing with its own official team.

During the last few years has some of the biggest automotive manufacturers have seen the brilliance of the virtual world. The likes of Ferrari, BMW, Mercedes, Aston Martin, Porsche and McLaren have all ventured into esports racing, and now Lamborghini have done the same.

We reported after the most recent season of Lamborghini’s esports series The Real Race that one of the three regional championship winners would be offered a full-time contract with Lamborghini to compete in esports. That lucky racer was EMEA regional champion Jordan Sheratt, and he is joined by 2020 Sim Grid World Cup winner Giorgio Simonini and former Ferrari F1 Esports driver Gianfranco Giglioli.

We are glad to present you our first Esports Team for virtual racing. Our sim drivers will be @jsherratt37, Gianfranco Giglioli and @SimoniniGiorgio, and they will represent our brand in the SRO Esports championships. And we are so excited about that!#LamborghiniEsports pic.twitter.com/WsxOuzR6a2

Lamborghini’s first venture into esports racing came in the form of the SRO GT World Challenge Esports Europe on Assetto Corsa Competizione, where in Round 1 on 6 April around Misano, Sherratt finished 11th and Giglioli was 15th. They will also compete together along with Simonini in the Intercontinental GT Challenge Esports series which is made up of all the long haul endurance races.

What else will Lamborghini do?

As of now, it’s difficult to imagine what Lamborghini may be interested in competing in beyond the SRO championships on ACC. They’re limited to only GT3 racing at the moment, so perhaps they could also compete in both GT Masters Esports and DTM Esports on RaceRoom, also iRacing Special Event enduros although there are no officially sanctioned iRacing GT3 championships ever since the demise of VRS GT iRacing World Championship.

A third edition of Lamborghini’s The Real Race will take place this year, where anyone can sign up to compete and earn a place alongside the likes of Giglioli, Simonini and Sherratt in the official Automobili Lamborghini Esports Team. Details for the competition are yet to be announced.

What do you make of Lamborghini’s entry into esports racing? Tell us on Twitter at @OverTake_gg or in the comments down below!