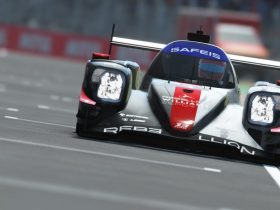 The teams will fight for a £100,000 prize pool in the newly formed league in Assetto Corsa.BMW Motorsport SIM Racing Team and Porsche24 by Redline are the final teams to join the V10 R-League. The teams confirmed their participation as well as their driver line-ups on August 20. In the newly-formed league in Assetto Corsa, eight invited teams race for a prize pool of £100,000.

Porsche Netherlands teamed up with pioneer organization Team Redline, which was able to win hundreds of major titles in 20 years of existence. They send esports racing veteran Atze Kerkhof, Ben Cornett and Michal Smidl to the competition.

“Since our inception in 2000 Team Redline has been pioneering in esports and we are proud to be part of the first ever V10-R season,” states Diederik Kinds, principal of Porsche24 by Team Redline, in an official press release.

The drivers are going to fight as a team in an innovative head-to-head league format. Find out more about the competition our article:

The final team joining the competition is BMW Motorsport SIM Racing Team. The German manufacturer has been increasing its involvement in esports racing and is eager to further develop by participating in the competition.

“We are determined to be a key player in the exciting future-oriented field of sim racing. In season one we want to learn as much as possible and deliver entertaining races to our fans,” says Rudolf Dittrich, General Manager at BMW Motorsport Vehicle Development.

That completes the team line-up for the competition. The participating teams are: