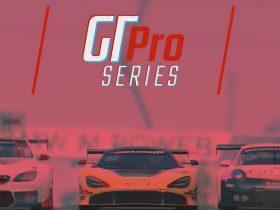 Eight top esports racing teams take on the first round of the Assetto Corsa V10 R-League this Monday.

It’s ready, set, go for one of the highest skilled esports leagues! This Monday, the lights go green at the first round of V10 R-League. Eight of the world’s best teams will race against each other at seven circuits, competing for a prize pool of £100,000.

The competition is going to be tough, as top teams such as BMW, Williams and Red Bull are entering their fastest drivers. The definitely counts as one of the tournament’s favorites, as the line-up of well-known esports racers Cem Bölükbaşı, Laurin Heinrich, Coque Lopez and Kevin Siggy is very strong.

Monza will be the opening circuit for Season 1, starting at 8pm CEST. As Gfinity PLC has organized broadcast coverage for up to 75 countries, you can tune in to different TV stations such as Sky.net, BT Sport 2 or ESPN depending on where you’re residing.

All participants in the V10 R-League:

For more information on the format and the participants, head over to our article here.

Or learn more about the special broadcast rights and the hosts of the event in this article below.

Who are you rooting for? Tell us on Twitter at @overtake_gg!