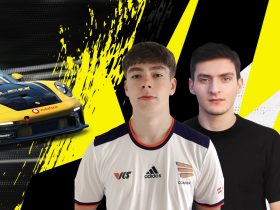 Eight iconic racing teams will fight for a £100,000 ($130,000) prize pool in the newly founded V10 R-League. The tournament held in Assetto Corsa presents an innovative format in which teams are going to compete head to head against one other squad. It is being organized by Abu Dhabi Motorsports Management and Gfinity.

Four teams have already been confirmed to take part in the inaugural season: JAESA Team Suzuki, Team Fordzilla, Racing Point Esports Team and Williams Esports. All teams are backed by notable names from the racing scene.

According to the organizers, the final line-up will be revealed in the coming days. On their social channels, the league promises old rivalries to be re-ignited in the tournament.

“The line-up includes some of the biggest names in motorsport, which helps to grow the credibility and professionalism of virtual racing,” says Steven English, Team Principal of Williams Esports, in an official press release.

The league will be played in a special format. Every team will send three drivers. These drivers will face off in three-vs-three matches. Each match consists of “three unique sprint challenges” which will “include a new level of team strategy” as the official website explains. No further details on what those challenges are going to look like have been given.

Each team will face each other one time (round-robin format), resulting in 28 matches throughout the season. All points earned in the face-offs contribute to the teams’ standings in the league.

The drivers will enter a open-wheeled single seater which has not been revealed as yet. All teams will drive an equal spec car capable of reaching up to 354 kph (220 mph).

A list of seven tracks has been selected for the tournament, but the organizers haven’t specified the line-up. The start date of season one as well as the driver line-up are expected to be announced soon.