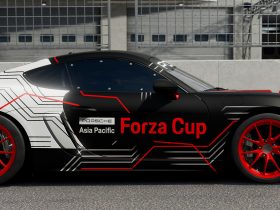 Get ready for the Porsche Asia Pacific Forza Cup!

With the upcoming release of F1 2021‘s Braking Point mode, Codemasters have revealed details of the characters who will be part of their storymode career.

Details about the characters of F1 2021‘s upcoming story mode Braking Point have been revealed by Codemasters in anticipation of the release of the game next month.

This is the officially-licenced F1 game’s first attempt at a major narrative-driven game mode, reminiscent of FIFA‘s The Journey. It will allow players to compete in three seasons of racing, one in Formula Two before two seasons in Formula One in which you can drive for one of five teams: Racing Point/Aston Martin, Alpha Tauri, Alfa Romeo, Williams and Haas.

You will play as Aiden Jackson, who is considered F1’s newest rising star. Having made it onto the grid from Formula Two, he’s certainly widely touted to be successful and is a likeable kid. However that comes with a lack of confidence as he struggles to transition to the big league and cope with the weight on his shoulders. This is only amplified as he’s already considered hot property to the bigger teams who are hoping to sign him.

Jackson is paired up with Casper Akkerman, an ice-cold and no-nonsense experienced hand who has had a rather accomplished and illustrious career. He’s feeling the pressure now as the crop of young talent are starting to break through the lower ranks and threatening his position within the sport, and he has to wonder if he would be best leaving the sport or staying on.

Then we have the returning Devon Butler, who featured in F1 2019‘s career mode through three scenario modes also featuring the popular Lukas Weber. Butler is a brash and self-assured character whose questionable off-track behaviour leaves something to be desired, and is always attempting to get under the skin of drivers that he considers to be a threat to him.

Moving off the drivers, there’s Brian Doyle. He acts as the go-between for Jackson, Akkerman and their team principal and is said to be a larger-than-life character who will not mince his words if he’s let down by his drivers. He lives and breathes F1 and will perhaps be a fan favourite as the Braking Point writers have openly credited the Netflix docu-series Drive To Survive as inspiration, so perhaps Doyle will be a lot like a very vocal team principal from Haas.

The final major character is Zoe Akkerman, Casper’s wife who knows the sacrifices that have to be made so her husband continues to race and the demons he faces. Together with their young daughter Lily, she never lets up in her undying support for her husband and always offers her sympathetic ear and kind words.

F1 2021 will be released on 13 July for people who pre-ordered the Digital Deluxe Edition and 16 July for everyone else.

What do you believe will happen in Braking Point? Tell us on Twitter at @OverTake_gg or in the comments down below!