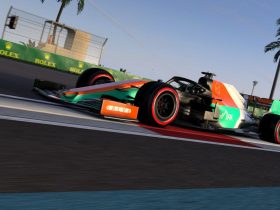 Monza should have been another great PSGL race, but instead a series of bugs in F1 2021 ‘s online gameplay brought proceedings to an early end.

The race also saw the PC debut of two-time PSGL PlayStation top tier champion Wilson Hughes, who was immensely impressive and holding his own against the experienced PC F1 Esports regulars. However, mid-way through the race, a series of bugs came into play, bringing the broadcast to a premature end.

A Farce At Monza

The bugs in question were a sight to behold. The timing graphics were fluctuating and not updating properly, cars began mounting each other, and they would start teleporting in an out of the pitlane and would, in an instant, turn around and go the wrong way up pitlane before being set back in the right direction. It was an absolute mess.

We apologise to all the drivers, commentators and viewers on the behalf of @Formula1game

We hope to be back next week! pic.twitter.com/Bzc6NkMTxJ

This is just the tip of the iceberg when it comes to issues that have befell the multiplayer side of F1 games in recent years, and it could hardly have happened at a higher profile event, at least not on this scale.

These bugs have not only been present in PSGL, but in multiple other smaller leagues as well, and it has become such that big name players and the casual playerbase alike are getting fed up with it.

This could not have happened at a worse time for the boiling over of relations between the F1 game community and Codemasters. Just two weeks ago, we reported on an exclusive F1 Esports-dedicated build of the game, which threatened to end the participation of Pro Championship drivers in racing leagues. This featured a handling model which differed from the base F1 2021 game, meaning that F1 Esports drivers would be practicing using an entirely different physics build to other players.

After an uproar from the community, Codemasters released a statement on the issue, but this failed to quell those who were discontent. The glitches shown in the PSGL race in front of 5,000 live viewers on the main broadcast alone – not accounting for the viewers watching each competitor’s individual streams – only further deepened the divide between the league racing community and Codemasters.

Firstly, want to apologise to the @PremierSimGL viewers for my use of language on the broadcast – just because we are in times of stress, shouldn’t resort to that. Sorry to all of you.❤️@Formula1game & @Codemasters – I now ask you to respond.#LeagueRacingComesFirst pic.twitter.com/41pScpdGQq

All in all, the F1 online community feel hard done by, and that their frustrations are falling upon deaf ears. Codemasters have not released a statement about this issue as of Friday, September 10.

What do you think of the state of online gameplay in F1 2021? Tell us on Twitter at @OverTake_gg or in the comments down below!