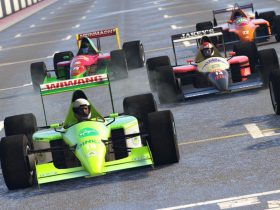 How to Win in GTA Online Open Wheel Races

F1 Manager 2022 has had a successful start to its life cycle – but is it already more popular than F1 22?

Which F1 Game Attracts the Most Viewers on Twitch?

When we want to compare how popular both games are within the community, the first thought is to just compare the player base of both games. But that is difficult in this case since neither Xbox nor PlayStation provide data on the current player base.

Why don’t we just compare the number of PC players of F1 22 vs. F1 Manager then? That is because F1 Manager is a strategic game, and therefore belongs to a genre that usually sells way more copies on PC than on consoles. F1 22 meanwhile is expected to sell more copies on consoles. You can see this effect on Metacritic, where console editions of F1 22 received more user reviews than on PC. For F1 Manager, the effect is turned around.

So, in order to make a valid comparison, we have to find another metric: Twitch viewership. First, because it is not only an indicator of how popular a game is among its buyers, but also how interested the entire community is. Second, data for F1 22, F1 Manager 2022 and other games indicates that Twitch viewership rises and falls almost uniformly with the current number of players. That provides us with the overarching metric we need in order to compare which game is the more popular one.

Let us dive into the data now. We already saw that on its release day, F1 Manager gathered a bigger audience than F1 22. But has that effect kept on?

F1 Manager’s popularity compared to F1 22 is also classified when we compare the peak viewership. At its most successful moment, F1 22 content reached 112,264 people at the same time on Twitch. That was on 4 July, six days after its release. F1 Manager 2022 meanwhile only reached 63,430 people at its climax.

One final game-related metric however could swing the favour back to F1 Manager. PC users seem to enjoy F1 Manager 2022 more than its big brother F1 22. 72.07% of all reviews on Steam are positive for F1 Manager 2022. For F1 22, this value only lies at 65.57%. While there might be more overall interest in the racing game, the strategic simulation seems to have delivered the better game experience in 2022.

F1 Manager 2022 or F1 22, which game do you prefer and why? Tell us your opinion by sending a tweet @OverTake_gg or leave a comment down below!