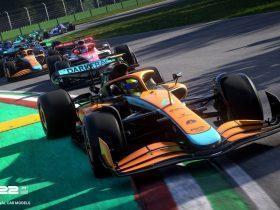 A couple of marketing departments for F1 teams will be feeling the wrath of EA as the first bits ofF1 22 gameplay on the Miami circuit were posted online, before quickly being taken down again.

As F1 has been sure to let everybody know, the inaugural Miami Grand Prix will take place this weekend. As a result, AlphaTauri and McLaren uploaded videos of onboard laps using a pre-release build of F1 22.

These videos weren’t up for long before they were quickly taken down again. It seems that the two teams inadvertently broke an embargo on F1 22 footage.

EA and Codemasters recently released some new official footage of the Miami circuit. This trailer featured confirmation of the first supercar players will be able to drive in game, the McLaren 720S.

On the evening of 4 May, both McLaren and Alpha Tauri released videos of their esports drivers taking on the new Miami circuit in F1 22. McLaren’s video, which featured Bari Boroumand taking the 2022 McLaren for a spin, was uploaded to their Instagram page. Meanwhile, Alpha Tauri dropped footage of Joni Törmälä in their newest contender.

In doing so, the two teams broke an embargo which EA set in place for new F1 22 footage. Tiametmarduk, one of the biggest F1 game content creators, tweeted about the matter. His statement all but confirms that he too has footage ready to release, and that he is also working under an embargo.

Reaction to the Footage

The overall reaction to the leaked gameplay videos has been mixed at best. Some fans on Reddit and Twitter have been quick to criticise the fact that there doesn’t seem to have been a significant visual overhaul. Others have complained about the in-game engine noise not being accurate enough. This latter point of contention has plagued the F1 games for years now.

However, others have taken a more optimistic outlook towards their first proper look at F1 22. In particular, the way in which the cars ride some of the more significant kerbs present in Miami seems to many a step up from F1 2021.

Another point of apprehension for many fans comes from the track itself. The second sector in particular has drawn criticism from fans, who say that it seems clunky. Naturally, these aren’t critcisms of the game itself as much as of the Miami circuit design.

Given the talk of embargoes, and the fact that both the F1 teams and F1 game content creators have access to the new game, it seems very likely that fans can expect more gameplay footage soon. Whether the new footage will only feature the new Miami circuit remains to be seen.

Now, EA sports have released a new trailer which features an onboard lap of the circuit in the Ferrari of championship leader Charles Leclerc. While this is indeed gameplay footage, the HUD and other overlays are not present.

It appears that fans will not have to wait long to see more. According to YouTuber BushiAntz on Twitter, EA will drop the embargo on F1 22 Miami content at 4pm BST/ 5pm CEST today, 5 May.

What do you think of the new F1 22 footage? Tell us on Twitter at @OverTake_gg or in the comments down below!