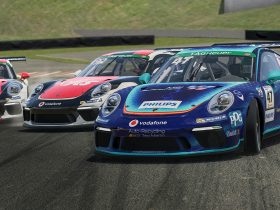 Esports racing tournaments are on the rise and the next exciting event is already waiting on September 19. iRacing announced the Almost Pro $10k iRacing Open this Friday, a special competition during the PAX Online featuring a prize pool of $10,000.

Drivers will have to race around the Roval at Charlotte Motor Speedway with the Global Mazda MX-5 Cup car. Apart from the cash prize pool, the participants will also be awarded with additional prizes from Intel. The tournament is open for players from the US and Canada.

Looking to cash in on that sim racing passion? We’re excited to announce the Almost Pro $10k iRacing Open powered by @IntelGaming!!

The event will take place during #PAXOnline, culminating in a final race on the virtual PAX Arena stage!

To qualify for the tournament, racers can simply log into iRacing from September 10 – 16 and run a lap in the PAX Arena Almost Pro Time Attack session. This mode can be accessed under the section “Go Racing”. The PAX Time Attack is listed among the other Time Attack Competitions on the left side of your screen.

The top 40 racers from this Time Atttack will advance to the main event at the virtual PAX Online. You can find additional information on the official homepage of iRacing.

What is PAX Online?

PAX is an annual series of gaming festivals in several places across the USA, as well as in Melbourne, Australia. The events all revolve around gaming and feature concerts, panels, exhibition booths, a LAN party and esports tournaments. All special events at this year’s online edition of PAX can be watched on their official Twitch channel, including the iRacing tournament.

Are you going to compete in the tournament? Tell us on Twitter at @overtake_gg!