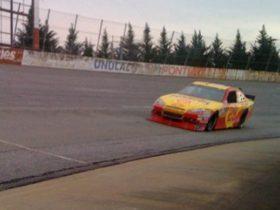 The fascination behind North Wilkesboro

Verstappen and Benecke secured the first win of the VCO proSIM Series at Motegi.

The inaugural VCO proSIM Series kicked off its first round last Wednesday. At Motegi, the duo of Max Verstappen and Maximilian Benecke was able to secure the first win of the tournament for Team Redline. Second place went to 2020 Porsche TAG Heuer Esports Supercup champion Sebastian Job and his teammate Philipp Eng, while Patrik Holzmann, who teamed up with Alexey Nesov, came in third.

Chequered flag is waved! 🏁 History-making victory for @TeamRedlineSim who secures the first-ever CHAMPIONSHIP RACE victory of the VCO ProSIM SERIES. Congrats to @Max33Verstappen and @maxbenecke11!#vcoesports #vcoprosim

Teaming up for the trophy

In its ProSIM Series, the Virtual Competition Organisation asks esports racers and real-life racing professionals join forces and fight for the win together. A total of 44 duos were created to compete for the prizepool of $50,000. The innovative concept attracted F1 pros like Romain Grosjean, Rubens Barrichello and Max Verstappen to the same degree as esports legends like Sebastian Job, Max Benecke and Mack Bakkum.

VCO leaves the choice of track for each round with its community: Through a Twitter poll, fans of both the real-life and virtual racing communities can decide which track their favorite drivers will compete on. Verstappen’s call for his huge community to vote for Motegi led to the GP-track being chosen.

To all my fans… if you want fun racing tonight vote for ‘Motegi’ please! It won’t disappoint 😎🔥 https://t.co/W9OD0XdFP9

Excitement all over the track

The pick has certainly proved successful for team Verstappen and Benecke, who also secured $1,000 in prize money with their win. But they were not the only racers who had a great time on Montegi. Sim racing content creator Jimmy Broadbent teamed up with Charlie Martin to participate in the tournament and showed that the fight for positions further at the back can also provide some gripping race action.

Broadcast didn’t catch it but this last lap battle was awesome!

Shame it was for P21 tho haha pic.twitter.com/rBXr3tamtF

In case you missed it, you can read VCO’s full recap of the first round here. The tournament will enter its second round on November 25. For updates on the choice of track, don’t miss out on VCO’s Twitter account.

Are you excited for round two after this thrilling opener? Tell us on Twitter at @OverTake_gg or in the comments down below!