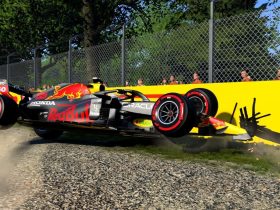 Jimmy Mullis has done it. After what had to be an unpleasent early exit from the playoffs of the 2020 eNASCAR Coca-Cola iRacing Series, the young American won HardToDrive300 event on Friday night.

HardToDrive300 is an event that takes place at Atlanta Speedway and lets racers drive in what is called the ‘Car Of Tomorrow’ (a former version of a NASCAR Cup car.) The combination of track and car presents a unique challenge to drivers. This is a real proving ground for any driver to test the depths of their skill.

Esports Journalist Justin Prince explains the difficulty like this:

Atlanta is known on iRacing as one of the biggest fall-off tracks. Drivers in the past have nearly or have blown tires in official races. You burn up your tires early in a run at Atlanta, you are in trouble. As well, the Car of Tomorrow is not an easy car to drive to begin with. It hasn’t been used for official racing outside of a couple series here and there for years. It also has less downforce and more horsepower than the current generation’s NASCAR Cup Series cars. Off-throttle time and proper braking is a must.

The race seemed to stay caution-free until just before the halfway mark, where a yellow made things interesting.

Welp. Caution on Lap 97 This should even things up! #HardToDrive300 https://t.co/mH2sIXRQ7y

In the end it was Richmond Raceway’s own Jimmy Mullis who took the chequered flag first, beating competitors like eNASCAR Coca-Cola runner-up Bobby Zalenski and 4-time eNASCAR champion Ray Alfalla in the process.

.#HardtoDrive300 CHAMPS! What a fun event, was awesome finessing it around this place with all the horsepower and no grip. That was indeed hard to drive, and I had a blast.

What did you think of HardToDrive300? Tell us on Twitter at @overtake_gg!