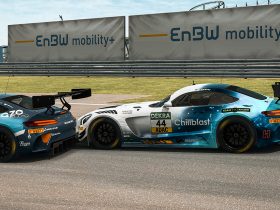 Big surprises in the reveal of the teams taking part in the upcoming 2021 eNASCAR Coca-Cola iRacing series.

Before the next season of the eNASCAR Coca-Cola iRacing Series can start, the traditional draft takes place. Over five days, the 40 drivers who have qualified, or are still present from last year, will sign with a team for this season. With the announcement of the participating teams, that period has now begun.

Certainly, the biggest surprise is the entrance of McLaren Esports into the pool of teams. While McLaren has traditionally been heavily involved in esports, eNASCAR has previously failed to catch their eye. However, they will be home to a duo of drivers for the upcoming season. Ray Alfalla and Bobby Zalenski could be potential candidates.

VRS and G2 cast off the oval

The reason Ray and Bobby are up for grabbs, is another shocking turn of events has occurred. The Virtual Racing School is not going to be part of the next eNASCAR season. While they have included some of the series’ biggest names, their time seems to be over. This is especially strange, considering the promotion of VRS’ own Mitchell deJong to the series this year. It remains to be seen where the Virtual Racing School drivers will end up, but the alternatives seem promising.

The exit of big organizations like G2 Esports and Renegades are counteracted by the addition of XSet and Spacestation Gaming. The latter is known for their endeavors in games like Rainbow Six Siege or Smite.

Undoubtably, the most sought-after driver will be last year’s champion Nick Ottinger. Last year, the young American secured his first eNASCAR title by winning a pheonomenal final playoff race. The signs seem to indicate that he will stay with his team William Byron eSports for next season though.

We will keep you updated on where everyone lands. Until then, we’re in for an exciting few days.

Will we see a big surprise in the eNASCAR draft? Tell us on Twitter at @Overtake_gg!