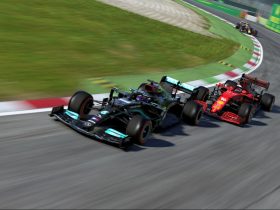 Some of the Best Racing Black Friday Deals

In the very first eNASCAR race at the Circuit of the Americas, Bobby Zalenski was hotly tipped for victory, but Mitchell deJong was primed to challenge him all the way.

Round eight of the eNASCAR Coca-Cola iRacing Series 2021 took place at the Circuit of the Americas in Texas on 18 May. Going in to the round, it was the Canadian  Keegan Leahy who held the points lead. However, with seven different winners in the first seven races the standings were still very tight, showing the high calibre of the field.

Enter Mitchell deJong. In his debut eNASCAR season, the 23-year-old American had snagged pole position twice so far in the season, but the race results didn’t match deJong’s qualifying prowess. The first pole position came at the opening race of the season at Daytona, where deJong could only manage eleventh at the chequered flag. His second pole came a few races later, at the Atlanta Motor Speedway. Again deJong couldn’t make good on the promise of qualifying, finishing down in nineteenth.

The American driver’s best result of the season was a single ninth place finish, which came during round five of the season at the Auto Club Speedway in California. The iRacing Rallycross champion wasn’t having the start to the eNASCAR season that he would have hoped for, but his fortunes were about to change for the better.

As he had done in Atlanta and Daytona, deJong went fastest in qualifying to net pole position for the race to come. It was a margin of three tenths of a second that Mitchell held over his nearest rival  Bobby Zalenski of Letarte Esports, whose own prowess at road courses had been much lauded in the build up to the race. However, like deJong, Zalenski was also yet to win in the eNASCAR 2021 season. The pair had a comfortable margin back to the rest of the field, and the stage was set for an eighth new winner in as many races.

Any hopes for a back-and-forth brawl between the front row sitters were snuffed out rapidly once the race got underway, as  Nick Ottinger in the William Byron eSports car misjudged his braking point and sailed into the side of Zalenski. Both drivers spun around, and several others had to carefully pick their way through the smokescreen caused by the incident.

Complete dominance.@MitchelldeJong1 is the real deal 👀

Mitchell deJong never looked back. Seizing the golden opportunity with both hands, he piloted his  23XI Racing car flawlessly throughout, and claimed his first ever win in the eNASCAR Coca-Cola iRacing Series. With a winning margin of a whopping seventeen and a half seconds to boot! As things stand, deJong is still down in seventeenth in the overall standings, but with ten rounds to go and a first win under his belt, will we see a late season charge from Mitchell? Only time will tell.

Do you think deJong can carry this momentum forward? Tell us on Twitter at @OverTake_gg or in the comments down below!